Explaining environmentalism to a taxi driver, in three miles or less

Environmentalists are often accused of being anti-progress or anti-development 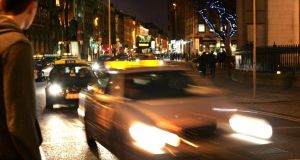 ‘Basically, we’ve got to stop selling bits of the car and find a handy mechanic to give it a good service.’ Photograph: Matt Kavanagh

I’m in a taxi, and after the obligatory nod to the weather and the state of Dublin’s one-way systems, the driver is telling me what he thinks about my choice of career.

He has a point. Environmentalists are often accused of being anti-progress or anti-development, which often translates as anti-people. Just like the taxman, we call society to account and demand what looks like compensation for birds, bees, trees and all the rest.

We’re not usually listened to – in spite of having science on our side. Evolution has programmed people to value the short term over the long term, and it’s a big part of the reason our species has been so successful in the first place.

But our success has altered the mechanics of the planet, and so if we want to continue to live on it in the manner to which we’ve become accustomed, we need to think long term.

I’m an unusual environmentalist in that I’m one of the few working in natural capital – a new concept that’s using the language of economics to preach to the unconverted and make it clear why the total liquidation of natural assets isn’t in anyone’s best interests, long term or short term.

“Okay,” I began. “You have a car, and that’s your asset that you use every day to make a living. You spend money getting it serviced to keep it in good working order, and every couple of years you invest in an upgrade. Now imagine that tomorrow, you wake up and think, no, I’m not going to go to work, I’ll just sell my wing mirror and that’ll cover the day’s takings. Would you do it?”

“No,” comes the response.

“Exactly. After a couple of weeks, you wouldn’t have any car left.”

He’s looking at me like I have a screw loose. “For pretty much all of human history,” I continue, “people have been trading in bits of our planetary taxi for better food, better houses, better medicine, better education, better lives. And it’s been great. By and large, we’re healthier, we live for longer and have better standards of living than ever.”

He grunts in agreement.

Me again: “The bits we’ve been trading haven’t mattered all that much – maybe a knob here, a chunk of dashboard there, perhaps some stuffing from the headrest. Some people have given out about it, but to most people, it hasn’t been too big a deal – it’s stuff we can fix later. And we haven’t bothered to keep a proper inventory or set aside money for a service.

“But now we’ve got more people than ever, demanding more prosperity than ever, and we’re starting to trade bits of the engine. We’re getting into the mechanics of it. Climate change, loss of wildlife, the collapse of insect populations, soil degradation, water pollution . . . They’re the brake pads, the spark plugs, the cam belt; and they’re breaking down. It’s not superficial any more. It’s serious. And we’re still driving the thing around like we haven’t a care in the world.”

“So then, when the cam belt breaks, it shatters the engine and you’ve got a write-off on your hands and there’s nothing you can do. When you hear about ecological tipping points and environmental thresholds and planetary boundaries in the news informed by the best scientific evidence, that’s what they mean. It’s not good for anyone.”

“So basically,” he says, “we’ve got to stop selling bits of the car and find a handy mechanic to give it a good service.”

“That’s it. And we need people like you to demand that it happens.”

That last point is the nub of the issue. News of collapsing insect populations doesn’t immediately resonate with politicians, but voter demand does. And it’s the unconverted in the political world who have the power to call a halt to the trade in planetary mechanics and demand that we comply with the findings of the environment’s NCT. I hope one of them gets into this man’s taxi.