A cradling theory for black hole formation in the early universe 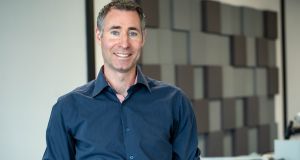 John, you and colleagues recently had a paper out in ‘Nature’ with a new perspective on how massive black holes formed in the early universe. Why were you looking at that?

What was the thinking before this new study?

It had been thought that these large black holes could have been formed at the centres of galaxies in the young universe if there was a source of radiation present to push stars to become massive quickly and collapse in on themselves to form black holes. But it didn’t all add up. The types of events that could generate enough radiation to affect star formation in this way were rare in the early universe, and so that didn’t account for the large number of massive black holes we can see had formed by this time.

What were your insights?

Working with my colleagues in DCU and collaborators at Georgia Institute of Technology, Michigan State University, the University of California at San Diego, the San Diego Supercomputer Center and IBM, we ran computer simulations based on the evidence we have from the early universe. We figured out that the energy to stop stars forming and instead create black holes could come via dark matter haloes around galaxies.

Dark matter is the most abundant form of matter in the universe, it makes up about 80 per cent or more of what exists. Galaxies are surrounded or cradled by haloes of dark matter, the galaxy is like the baby in the middle. When these haloes crash into each other, energy is released. We calculated that this energy could account for the formation of massive black holes during this early phase of the universe.

Cool! What’s the next step?

I’d really love to look more now at small galaxies that haven’t changed much since those early days. Technology is advancing such that we can see these small, ancient galaxies with telescopes, and we are also able to create more granular and robust simulations. So I would hope we will see that the observations and the simulations continue to tell us more about this pathway we have put forward for black hole formation.

Growing up in Castlebar, Co Mayo, I was always interested in space. I studied physics and astrophysics and high-performance computing at Trinity College Dublin, then I did a PhD in Cambridge University on numerical astrophysics, which looks to build mathematical and computer models of the universe. That was when I started studying black hole formation.

What are the best and worst things about research?

The worst is the job insecurity – researchers in academia can be on short-term contracts for quite a while until a coveted permanent position becomes available. The best is that you get to do what you love. There is also flexibility, in that I can arrange my working day so that I can bring the kids to school, and I can go out for a run or play Gaelic football. That’s a good balance.

Do you ever stop thinking about your work completely?

Probably not, it’s always whirring away at the back of my mind.