Why do we continue to exhibit animals in zoos? 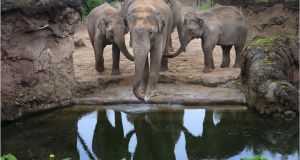 Recent controversy about the death of animals in Tayto Park is a reminder of the complexity of keeping animals in captivity for human amusement. When most zoological gardens were founded, around the middle of the 19th century, western Europeans were certain of their place in the world. A 19th-century zoological garden was an educational display for the pleasure of human visitors with only limited obligations to animal welfare. Humans, at the top of the great chain of being, had a God-given right to superintend the animals of the world as they saw fit.

The animal rights movement, concerns about species extinction, and climate change have affected our perspective, at least a little. Yet arguing about how many animal deaths is tolerable in captivity is not really addressing the fundamental question of whether we think collecting and displaying animals for our amusement is ethical.

Deaths in the early zoo were to be expected. A combination of poor living conditions and unfamiliar diets contributed to the death rates. Animals used to a warmer, drier climate suffered particularly badly. Tuberculosis and pneumonia were often blamed for the deaths of monkeys, many confined in very close quarters to keep them warm. Rats preyed on small mammals and birds. Animals injured themselves on their cages and their wounds could fester and lead to death. In 1836, the elephant almost broke down her door, injuring herself in the process. The bears cut their feet on their cage in 1860 and a member hoped that “perhaps it will not be of serious consequence”. The Barbary ape was killed in 1862 before she could die of a wound that was “absolutely rotten”.

This is not to say that the society evinced no care for the animals; they absolutely did. If nothing else, replacing animals was expensive and the society rarely had an excess of funds. When an old lion was sick in 1863, keepers stayed up all night feeding him “broth and whiskey”.

They were choosy about food when they could afford it, and dictated improved diets and outdoor exercise to promote health. They worked hard to discourage visitors from harming or teasing the animals. Yet the society never questioned whether it was right for people to keep animals in cages so that other people might look at them. Human cultural norms rather than animal needs dictated aspects of animal care. Carnivores were not permitted meat on Sundays in 1832. Animals were encouraged or denied opportunities to reproduce, depending on the needs of the zoo.

Yet we rarely ask ourselves the more difficult question of why we continue to exhibit animals in zoos. We certainly never exhibit people in this way, a practice that was common enough throughout the 19th century. I am not a vegetarian or an animal rights activist and I have always enjoyed a visit to the zoo. Zoos can draw attention to conservation issues and offer a kind of refuge for endangered species. Zoos remain immensely popular tourist attractions. But when we see concerns raised about how animals are treated in one menagerie, maybe we should take the opportunity to discuss whether we want to continue keeping animals in captivity in the future.