A rare celestial event graced the skies this week when a blue moon and lunar eclipse combined with the moon being at its closest point to Earth, resulting in what is being called a “super blue blood moon”. Video: NASA 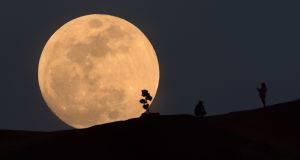 The last time the three elements combined at the same time was in 1866. Photograph: AFP

A rare celestial event will grace the skies on Wednesday when a blue moon and lunar eclipse combine with the moon being at its closest point to Earth, resulting in what is being called a “super blue blood moon”.

The trifecta will take place on Wednesday, January 31st and will be best visible from the western hemisphere. The last time the three elements combined at the same time was in 1866.

A “super blue blood moon” is the result of a blue moon - the second full moon in a calendar month - occurring at the same time as a super moon, when the moon is at perigee and about 14 per cent brighter than usual, and a so-called blood moon - the moment during a lunar eclipse when the moon, in the Earth’s shadow, takes on a reddish tint.

For those in the Middle East, Asia, eastern Russia, Australia and New Zealand, the event will be visible. Unfortunately, the moon will not be visible in Ireland. The eclipse is due to end before the moon rises in Irish skies at 5.15pm on Wednesday evening.

“When we watch the moon rising, the eclipse will be over by more than an hour so we definitely won’t see it,” said Astronomy Ireland director David Moore.

However, Nasa will be showing it live at https://www.nasa.gov/nasalive

The super blue blood moon will be visible in the evening skies in the Middle East, Asia, eastern Russia, Australia and New Zealand.

It will also be available to watch in the morning skies on the east coast of the United States.

“For the Continental US, the viewing will be best in the west,” said Gordon Johnston, programme executive and lunar blogger at Nasa. “Set your alarm early and go out and take a look.

“Weather permitting, the west coast, Alaska and Hawaii will have a spectacular view of totality from start to finish,” said Mr Johnston. “Unfortunately, eclipse viewing will be more challenging in the eastern time zone. The eclipse begins at 5.51am ET, as the moon is about to set in the western sky, and the sky is getting lighter in the east.”

The eclipse itself is expected to last about an hour and a quarter. For anyone unable to watch the event in person, it will be streamed live online.

Nasa said the eclipse will offer scientists a chance to see what happens when the surface of the moon cools quickly.

“The whole character of the moon changes when we observe with a thermal camera during an eclipse,” said Paul Hayne of the Laboratory for Atmospheric and Space Physics at the University of Colorado Boulder.

“In the dark, many familiar craters and other features can’t be seen, and the normally nondescript areas around some craters start to ‘glow’ because the rocks there are still warm.”