A new year’s resolution for the environment? Reduce activity 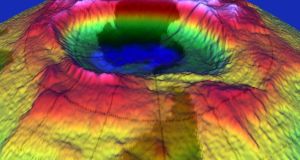 Resolution fulfilled: A 3-D image of the hole in the ozone layer high above Antarctica. Collective human effort through the banning of chlorofluorocarbons helped fill in the hole. Image: Nasa

So come on, who out there has made new year resolutions for self-improvement? Going to the gym, eating more veg, drinking less, less stress at work? Sound familiar? And who out there made these same resolutions last year? And did you keep them? Are you fitter, healthier, less stressed? I know I make these resolutions annually, and yet I am neither healthier nor fitter, and probably more stressed.

It’s the same when it comes to the environment. We keep making grand resolutions – the Convention on Biological Diversity; the Paris climate agreement; the Sustainable Development Goals – and yet the environment is probably in a worse state than ever. Every day we hear about the impact of climate change, how our water is polluted with plastics, that our bees are being poisoned with pesticides.

Twenty-five years ago, in the early years of the internet and long before smartphones, more than 1,700 concerned scientists including the crème de la crème of the scientific world – most of the living Nobel laureates – wrote a letter of “warning to humanity”. They called for a stop to environmental destruction and asked for change in the way we look after our planet.

They were concerned about the ozone layer, polluted water, pressures on marine life, forest loss, climate change and human population growth, and that humankind was pushing ecosystems beyond their capacity to support life on earth. They urged us to reduce greenhouse gas emissions, halt deforestation and reverse biodiversity decline.

A quarter of a century on, how have we responded? Well, the resolutions are ten a penny, but aside from stabilising the ozone layer, we have failed spectacularly to solve any of the other challenges they pointed out. In fact, we’re making them worse.

In a new “second notice” to humanity, signed by more than 15,000 scientists and published late last year, the situation is outlined as critical: climate change has put us on a trajectory to catastrophe and we are in the midst of a global mass-extinction. There are more marine dead zones, CO2 emissions and people on the planet, and less freshwater, lower marine catches, less forests, and fewer animals today compared with 1992.

There are solutions to these problems, and 13 of them are listed in the scientists’ “second notice”. These include managing and restoring natural habitats and ecological interactions; creating policies to address poaching and trade in threatened species, reducing food waste and eating less meat, increasing education to reduce fertility rates, improving awareness of and appreciation for nature, developing economic instruments to encourage positive environmental change (including adopting renewables), taking into account the real costs of consumption, and reducing wealth inequality.

Most of these solutions are covered by the Sustainable Development Goals. These are the global targets we’ve agreed to meet by 2030, and they are being translated right now into national and international policies and practices worldwide. They’re ambitious and systemic, and designed to deliver the change we need. But, based on past performance, I find it hard to shake the scepticism that they will become yet another unresolved resolution.

While we know that it is possible to keep environmental resolutions (we phased out CFCs, after all), we also know that swallowing our own best advice isn’t something that comes naturally. So instead of taking personal action, we disempower ourselves by blaming the politicians and the corporations for not doing enough. But these powerful actors respond to pressure from the electorate and the consumer – that’s us, people. Whether we like it or not, we are part of the system that is causing the problem, and we have the power to change it.

So how should we use that power? The answer may not be to put pressure on ourselves to “do more”. I wonder instead what kind of impact we’d have on the environment, as well as on our own health and wellbeing, if we resolved to do less? Work less. Consume less. Travel less. In our busy, always-on lives, punctuated with takeaway coffees, conveniently-wrapped groceries, budget flights, endless activities and fast fashion, where even deep breathing and a good stretch has to be scheduled, less might actually be more.

Jane Stout is a professor of botany in the School of Natural Sciences, Trinity College Dublin