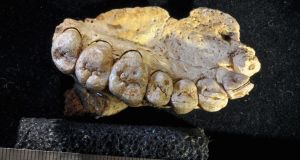 A complete jawbone with teeth recently discovered at Misliya Cave on Mount Carmel, Israel. The jawbone is dated to 177,000-194,000 years ago, indicating that modern humans were present in the Levant at least 50,000 years earlier than previously thought. Photograph: EPA/Tel Aviv University

A prehistoric jawbone discovered in a cave in Israel has prompted scientists to rethink theories of how the earliest human pioneers came to populate the planet, suggesting that our ancestors left Africa far earlier than previously thought.

The fossil, dated to nearly 200,000 years ago, is almost twice as old as any previous Homo sapiens remains discovered outside Africa, where our species is thought to have originated.

Until recently, several converging lines of evidence – from fossils, genetics and archaeology – suggested that modern humans first dispersed from Africa into Eurasia about 60,000 years ago, quickly supplanting other early human species, such as Neanderthals and Denisovans, that they may have encountered along the way.

However, a series of recent discoveries, including a trove of 100,000-year-old human teeth found in a cave in China, have clouded this straightforward narrative. And the latest find, at the Misliya cave site in northern Israel, has added a new and unexpected twist.

“What Misliya tells us is that modern humans left Africa not 100,000 years ago, but 200,000 years ago,” said Prof Israel Hershkovitz, who led the work at Tel Aviv University. “This is a revolution in the way we understand the evolution of our own species.”

The find suggests that there were multiple waves of migration across Europe and Asia and could also mean that modern humans in the Middle East were mingling, and possibly mating, with other human species for tens of thousands of years.

“Misliya breaks the mould of existing scenarios for the timing of the first known Homo sapiens in these regions,” said Chris Stringer, head of human origins at the Natural History Museum in London. “It’s important in removing a long-lasting constraint on our thinking.”

The fossil, a well-preserved upper jawbone with eight teeth, was discovered at the Misliya cave, which appears to have been occupied for lengthy periods. The teeth are larger than average for a modern human, but their shape and the fossil’s facial anatomy are distinctly Homo sapiens, an analysis of the fossil in the journal Science concludes.

Sophisticated stone tools and blades discovered nearby suggest the cave’s inhabitants were capable hunters, who used sling projectiles and elegantly carved blades used to kill and butcher gazelles, oryx, wild boars, hares, turtles and ostrich. The team also discovered evidence of matting made from plants that may have been used to sleep on. Radioactive dating places the fossil and tools at between 177,000 and 194,000 years old.

Prof Hershkovitz said the record now indicates that humans probably ventured beyond the African continent whenever the climate allowed it.

“I don’t believe there was one big exodus out of Africa,” he said. “I think that throughout hundreds of thousands of years [humans] were coming in and out of Africa all the time.”

Reconstructions of the ancient climate records, based on deep sea cores, show that the Middle East switched between being humid and extremely arid, and that the region would have been lush and readily habitable for several periods matching the age of the Misliya fossil.

The idea of multiple dispersals is supported by recent discoveries such as the teeth unearthed in China, human fossils in Sumatra from about 70,000 years ago, archaeological evidence from Northern Australia at 65,000 years and fossils previously discovered near Misliya dating to 90,000-120,000 years ago.

The scenario also raises the possibility that the eastern Mediterranean may have acted as a crossroads for encounters between our own ancestors and the various other human species, such as Neanderthals, who had already reached Europe.

“We’re like a train station that everyone’s passing through,” said Prof Hershkovitz.

Scientists have already shown that interbreeding with Neanderthals, whose lineage diverged from our own 500,000 years ago, occurred some time in the past 50,000 years. As a legacy, modern-day Eurasians carry 1-4 per cent of Neanderthal DNA.

However, a recent analysis of DNA taken from a Neanderthal leg bone found in a German cave hinted at much earlier encounters between the two species, dating back more than 200,000 years. The new fossil adds plausibility to this theory.

“It means modern humans were potentially meeting and interacting during a longer period of time with other archaic human groups, providing more opportunity for cultural and biological exchanges,” said Rolf Quam, Binghamton University anthropology professor and a co-author of the study.

The discovery also raises intriguing questions about the fate of the earliest modern human pioneers. Genetic data from modern-day populations around the world strongly suggest that everyone outside Africa can trace their ancestors back to a group that dispersed around 60,000 years ago. So the inhabitants of the Misliya cave are probably not the ancestors of anyone alive today, and scientists can only speculate why their branch of the family tree came to an end.

Prof David Reich, a geneticist at Harvard University and an expert in population genetics and ancient DNA, said: “It’s important to distinguish between the migration out of Africa that’s being discussed here and the ‘out-of-Africa’ migration that is most commonly discussed when referring to genetic data. This [Misliya] lineage contributed little if anything to present-day people.”

“These early exits are sometimes termed ‘unsuccessful’ or ‘failed’,” said Mr Stringer of the Natural History Museum in London. “Some of these groups could have gone extinct through natural processes, through competition with other humans, including later waves of modern humans, or they could have been genetically swamped by a more extensive 60,000 year old dispersal.” – Guardian