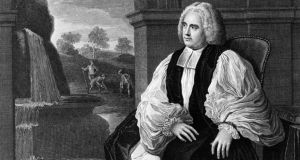 Irish philosopher George Berkeley, the Bishop of Cloyne and a noted metaphysician who declared: ‘To be is to be perceived’. Image: Hulton Archive

A scientific explanation of the “hard problem” of how the material structure of the brain underpins consciousness would represent a major coup for science. However such a straightforward explanation doesn’t seem possible at present because science is unsure about how matter behaves at its very root. This problem is discussed by astronomer Prof Adam Frank in Aeon. I can already hear some of you saying: “Here goes Willie again trying to palm off some sort of mysticism”. But I am not, and neither is Adam Frank, an avowed atheist who believes “no aspect of the natural world requires supernatural intervention”.

In the classical Newtonian world, prior to the 20th century, the state of a particle (location and velocity) of matter could be defined according to Newton’s equation F=ma. Apply a force F to a particle of mass m and it moves with acceleration a. However, when matter was examined in the 20th century at the atomic level, a much more complicated and fuzzy picture emerged.

At this minute level matter exhibits quantum behaviour described by a form of mathematics called quantum mechanics. The physicist Erwin Schrödinger (1887-1961) developed an equation for dealing with quantum objects. Solving the Schrödinger equation yields the wave function for the object. A wave function does not specify a precise location and velocity for the quantum particle but instead is an ensemble of all possible states of the particle with associated probabilities – the particle appears to have many positions and many velocities.

The Danish physicist Niels Bohr (1885-1962) introduced the popular Copenhagen Interpretation (CI) of the behaviour of wave functions. The CI says that the wave function is a superposition of all possible states of the particle that collapses to one particular state when an observer makes a measurement thereby assigning a critical role to the interaction between the observer and the wave function. Many physicists favour this CI interpretation.

An alternative explanation, also favoured by many physicists, is the many worlds interpretation (MWI) of Hugh Everett (1930-1982). The MWI holds that, when a measurement is made, the integrity of the wave function is not affected because the universe splits into many parallel copies of itself, each one housing the same experimenter finding the particle in one of the locations described in the superposition of possibilities of the wave function.

There is no consensus as to which interpretation is correct. Both have advantages and disadvantages. The CI introduces a difficulty for a materialistic reduction of mind to matter because its explanation of matter depends on the observer’s mind. And, although MWI removes dependence on the observer’s mind, it comes at the high price of positing an infinite number of parallel universes.

Of course, as Frank notes, consciousness may eventually be explained as a complex series of information processing systems that can be adequately described by classical Newtonian physics, thereby obviating the need to deal with the weird quantum world. However this remains to be scientifically demonstrated.

There is an interesting Irish connection to the idea of a mind-matter connection. George Berkeley (1685-1783), Anglican Bishop of Cloyne, proposed that mind-independent things do not exist, coining the famous phrase “to be is to be perceived”. This raised the interesting question as to how any material object can exist when nobody is observing it. Samuel Johnson was so irked by this notion that he closed his eyes and kicked a large rock saying, “I refute it thus”. And the answer to the problem of how the world existed before the advent of conscious observers was that God was watching it.

On this note let me finish with a story. A burglar broke into a house at night and was examining the rooms using a torch. He suddenly heard a squeaky voice say, “Jesus is watching you”. He looked around frantically to find the speaker but saw nobody. Again the squeaky voice said, “Jesus is watching you”. He searched again and, with enormous relief, identified the speaker as a caged parrot in the corner. Relaxing, he asked the parrot, “What sort of an idiot would teach his parrot to say that?” The parrot replied, “The sort of idiot who named his pit-bull Jesus.”