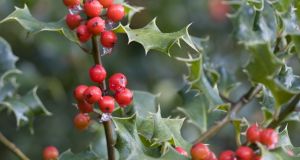 The European holly (ilex aquifolium) is one of the 6 per cent of flowering plants that are dioecious and have male and female functions in separate individuals. Photograph: Getty Images/iStock

You find out the hard way that buying a holly sapling for your garden is a game of Christmas Russian roulette. There is a 50 per cent chance of getting a female which, if pollinated, produces festive red berries. The other 50 per cent of the time you get a male which produces tiny white flowers in September that provide pollen but no berries at Christmas.

The European holly (ilex aquifolium) is one of the 6 per cent of flowering plants that are dioecious and have male and female functions in separate individuals. The vast majority of plant species reproduce as hermaphrodites through both male (pollen) and female (ovule) functions on the same plant.

Plants have very complicated sex lives. Male and female functions are distributed in many different ways within and between plants in a population. Individual flowers can be male, female or hermaphrodite.

Whole plants can have a sliding scale of male and female functions and those functions may be sequential in time. A plant that starts out as a male pollen producer for years can suddenly become a female seed producer if circumstances change. So, talking about “the birds and the bees” when dealing with plants is tricky.

It takes a few years before holly trees get big enough to produce flowers which can be sexed. To ensure you get a good berry crop you should buy a few different plants of the same variety and keep your fingers crossed. Once you have a female holly, and hopefully a male somewhere within pollinating distance, you are reliant on the local pollinators to do their job and bring the pollen to the female.

Luckily several species of bees are good pollinators of holly and can travel several hundred metres between plants. However, the female holly needs a bee to have visited a male first to pick up the pollen needed. This highlights a fundamental problem for plants: they cannot actively find their own mate and have to rely on wind, water or the coercion of animals to move pollen around for them.

The ability of all plants in a population to produce seeds and mate with any other plant in the population is why hermaphrodite plant species are more common than separate sexes. However, being a hermaphrodite does not necessarily mean that you can mate with yourself (termed self-compatibility). If a species is self-incompatible individual plants still have to find another mate but the chances of finding a partner are higher if all plants in the population can act as both males and females.

There are some wacky mating systems in plants such as the ribwort plantain (plantago lanceolata) where populations include plants that act as females, with no pollen-producing flowers, and plants which have both male and female functions in the same flowers. Ribwort plantain is wind pollinated so relies on capturing pollen drifting in air currents to fertilise its ovules. This may be a reasonable strategy in big populations but when a female is isolated and pollen is hard to come by, it can be risky to be female.

The ultimate in avoiding pollination problems are plants, such as dandelions, which do not normally need another mate and produce seeds on their own. The ability to reproduce clonally by seed is termed apomixis.

Usually, each tiny dandelion seed, attached to its fluffy parachute, is an exact clone of its mother. While there are advantages to not having to find a mate, there are also downsides. Inbreeding depression through mating with oneself or a close relative can reduce the quality of the offspring because it can result in multiple copies of damaging mutations at a particular location in the genome.

In clonal plants, mutations can arise which can doom a whole lineage to extinction or the environment can change making a previously successful clonal genotype no longer suited to those conditions.

So, even dandelions have some residual sexuality where occasional sexual events bring variety back into the genome. It seems that variety is the spice of life when it comes to plant sex.