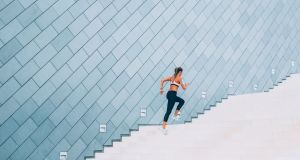 Exercise leaves us healthier and more likely to live longer, yet many of us struggle to swallow the recommended dose of physical activity.

This is because it is unnatural to exercise, says Prof Daniel Lieberman, a top evolutionary scientist at Harvard University. He has studied extinct humans and living hunter gatherers for decades, and describes exercise as a uniquely modern phenomenon.

“When people don’t exercise, we label them as lazy,” laments Lieberman, “but they are actually doing what we evolved to do - which is to avoid unnecessary physical activity.” His recent book is Exercised - The Science of Physical Activity, Rest and Health. In it he busts myths and misunderstandings about exercise by looking at it from the viewpoint of evolutionary biology and anthropology.

The biggest myth, he says, is that it is normal to exercise. Our hunter-gatherer and farming ancestors never ran or walked several miles a day just for health. Lieberman explains why exercising can be so difficult and suggests how to overcome our instincts to avoid it.

If you ever watched the gorillas or chimps in Dublin Zoo, they spend a lot of time inactive, sitting around grooming or feeding. A 2016 study in Nature showed that apes spend hundreds of calories less energy per day than we do. A chimpanzee typically is inactive for 10.5 hours in a 12-hour day. Our ape ancestors evolved for sluggish activity levels to suit life in a rainforest.

Around 7 million years ago, as the climate in Africa dried and rainforests retreated, our ancestors evolved to walk on two legs. They took on a different strategy to our ape relatives, wherein we spent more calories to earn more calories - and reproduce twice as fast. “We evolved an unusually expensive way of increasing our reproductive success, from an unusually low-energy-budget ancestor,” Lieberman writes. He argues that as result, our deeply embedded human instinct during downtime is “to be as inactive as possible.”

While some describe sitting as the new smoking, he scoffs at this notion. “Hunter-gatherers sit as much as Westerners,” he says. Studies of Hazda hunter-gatherers in Africa show them typically spending nine hours sitting, two hours squatting and an hour kneeling each day.

Still, average hunter-gatherer men and women walk about 9.5km (six miles a day), respectively, in order to hunt or collect food. We evolved to walk with extreme efficiency. Chimps spend about twice as many calories to walk the same distance as humans. Therefore, it is hard to expend large amounts of calories quickly by walking. Our ancestors evolved to be endurance walkers, adds Lieberman, but only when necessary. Our adaptions include a big toe that points forward, angled thighs and the forward curve in our lower spines.

One part of Lieberman’s research that attracts media attention is his focus on how we also evolved for endurance running. “We have short toes, and an arch in our foot, which is basically a spring. You don’t need an arch for walking, but you need one for running,” he says. “We have long tendons in our leg like the Achilles’.”

And there’s our unusually large gluteus maximus, the largest muscle in the human body. “Which we don’t use when we are walking, but which is incredibly important for running,” says Lieberman. There is also a special “nuchal ligament,” which works like a spring and keeps our heads steady as we run.

Gorillas, chimps and our early ancestors lack this ligament. It first appears about two million years ago in Homo erectus, along with other adaptations for running. Fossil evidence suggests that this is when running long distances to scavenge and hunt became important. We were never fast. Almost all four-legged creatures can outsprint Usain Bolt. Instead, we evolved to be long-distance runners.

Lieberman proved this to himself when he once took part in a race in Arizona over 40km (25 miles), with 40 others on shank’s mare, competing against 53 horses and riders. After 4 hours 20 minutes, he had finished ahead of all but 13 horses.

While antelopes, horses and zebras easily galloped away from human hunters, our ancestors (just like Lieberman in Arizona) did not give up. Yet for most of human history, hunting animals meant getting up close. The first stone-tipped spear dates to around 500,000 years ago, and the bow and arrow was invented just 100,000 years ago.

Persistence hunting seems to have been widespread. This involves humans running and walking after prey, never letting it cool down, and tracking it until it overheats and exhausts itself. The San hunter-gatherers in the Kalahari in southern Africa have been recorded hunting in this way, with the average distance slightly longer than a half marathon.

Humans are especially adapted not to overheat. In his book, Lieberman crowns humans the sweating champions of the world. We alone have five to 10 million sweat glands all over our skin, allowing us to sweat one litre every hour, which keeps us cool, something animals we pursue cannot do.

“Until relatively recently, running was part of everyday life,” says Lieberman. This includes accounts from Native Americans, Australian aborigines, Africans and Siberians. It is only in the modern world that we don’t have to run anymore and with that comes problems.

Walking and running are essential to switch on repair and maintenance in our bodies. Exercise breaks down muscles and triggers inflammation, but this in turn switches on anti-inflammatory and repair mechanisms. The long-term effect is less inflammation all over the body. Exercise also keeps off belly fat, which in itself is a major cause of inflammation and other problems. “We evolved to be physically active. It is important for almost every system in the body,” he adds.

But we evolved to be active when it is either necessary or fun - dancing is a fun tradition in almost all human cultures. When we exercise we produce chemicals that make us feel good and can lift our mood. But dopamine levels, for example, only go up after we exercise, so cannot get us off the couch, and (rather unfairly) overweight people have fewer dopamine receptors. We never evolved to be physically inactive and out of shape, so many of the rewards from exercise only come after several months, Lieberman explains .

We all know exercise is good for us. But our natural instinct is not to exercise. “Two-thirds of Americans don’t exercise, and I dare say that the data are not that different in countries like Ireland and elsewhere,” Lieberman says. He argues that we need to accept how natural it is not to exercise and come up with ways to get around this - similar to how we approach education.

The key to getting started is to try make it social and fun and also to enter into a commitment contract, like we do during university studies. “I am a professor at a university where students pay for me to essentially torture them, making them do all kinds of work,” Lieberman says. He supports compulsory physical activity in schools and universities.

For adults, we might schedule exercises with a friend, and be socially obligated to show up. One can pay to enter a race or event that requires training, or post exercises online so others can see what you are doing, and not doing. Or one could designate someone you admire or fear as a referee to check up on your progress. Or commit to teams or sports clubs. “One thing we do with education is make it social and we make it fun,” he points out – and we should do the same with exercise.

The book Exercised can easily be enjoyed over the upcoming festive season, when we all begin to consider changes for 2021 and most of us reflect on how we might fit in – against our instincts – more exercise.