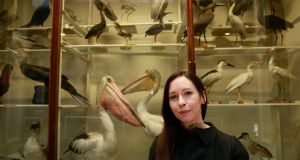 Irene Fogarty was selected as the winner of the inaugural Mary Mulvihill Memorial Award for science journalism.

An MSc student in world heritage conservation, Ms Fogarty was presented with the €2,000 science journalism prize by Prof Jane Grimson of Women in Technology and Science at an event in the National Library of Ireland.

The topic for this year’s competition was women’s contribution to science and technology. Ms Fogarty’s article examined how indigenous women were making an impact on scientific research into climate change mitigation.

The competition for third-level students was set up by the family and friends of Ms Mulvihill to honour the late journalist’s work in science reporting, communication and heritage. She was a regular contributor to The Irish Times.

Anne Mulvihill, a sister of Mary, said she was delighted with the response to the competition, which aims to reflect the “curiosity and creativity that was inherent” in Mary’s work.

Commenting on the winning entry she said: “It was well written and presented, clear and informative; it shared the stories of the contribution to science made by groups of indigenous women. Mary would have enjoyed her piece.”

Ms Fogarty, who also works as an audience researcher with The Irish Times, said in memory of Mary Mulvihill she would be donating half of her prize money to the UN Fund for Gender Equality, which supports indigenous women.

Runners-up in this year’s competition were Adeleh Mohammadi, an Iranian-born PhD student in the department of civil engineering at NUI Galway, and Anne Burke, who is studying for an MSc in science communication at Dublin City University.

Ireland-Italy rugby match to be called off due to coronavirus risk 18:50
Masks and hand gel sell out as coronavirus fears take hold 18:26
Murder accused ‘lay down’ with wife for 10 minutes after killing her 18:01
Martin and Varadkar agree further ‘exploratory’ talks 17:57
Woman claims prison ‘slopping out’ regime affected her health 17:40