Findings add to understanding of how neurodegenerative diseases are triggered 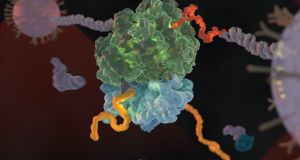 A picture of ribosomes (blue and green) which are critical to triggering the making of protein in a cell by way of a folding mechanism. In the case of Alzheimer’s and Parkinson’s diseases it is believed the protein does not fold correctly.

Patients with neurodegenerative diseases such as Alzheimer’s and Parkinson’s may gain a greater understanding of how their condition is triggered, and ultimately be able to avail of new treatments, after a research breakthrough led by scientists at Trinity College Dublin.

The team has demonstrated how proteins fold when they are being produced in the cell.

This discovery provides greater understanding how this process occurs in the case of Alzheimer’s and Parkinson’s.

A group of international researchers led by Prof Martin Hegner, investigator at CRANN research institute and Trinity’s School of Physics, have for the first time observed the process in real time. Their findings have been published on Tuesday in the journal, Proceedings of the National Academy of Sciences.

There can be several million ribosomes in a typical human cell and they are about 20 nanometres in diameter.

The assembly of proteins is crucial for a healthy functioning body and all the proteins in our bodies must fold into complex shapes to do their job.

While protein synthesis is of fundamental importance in cellular processes, how they are created is not fully understood.

One of the events that occurs during protein synthesis is “folding”, where the chains of amino acids (polypeptides) fold into their final 3-dimensional structures.

Several neurodegenerative diseases, and many allergies are believed to be the result of misfolded proteins.

This research is thus important in developing further understanding of such conditions and in developing drugs that can target and prevent certain foldings. There has been interest expressed in the research by pharmaceutical companies.

Prof Hegner explained: “The ribosome translation machinery is a highly complex system, involving many different factors such as energy input, messenger RNA decoding, amino acids, as well as their relative movements and interactions.

“Investigating this system at the single-molecule level required a highly ambitious and multifaceted approach that pushes the boundaries of what is technically possible.”

The team identified key mechanisms within individual ribosomes using their unique optical tweezer instrumentation. “Our expertise in the design of the device and the biological experiment, along with colleagues in Germany enabled us to ‘grab’ the ribosome and the nascent protein chain and provided sufficient stability and sensitivity to observe the synthesis and folding of single polypeptides in real time at the nanometer scale,” he added.

This was the first time this had been observed, Prof Hegner noted, and it was very significant to the research community and in developing more in-depth understandings of protein synthesis – ie folding – and certain diseases.

Prof Hegner was awarded a Science Foundation Ireland principal investigator award in 2016, valued at €1.3 million, which will enable him to continue his work in this field.

The structure of the ribosome at atomic resolution was only determined in 2000, for which the Nobel Prize in Chemistry was awarded in 2009.