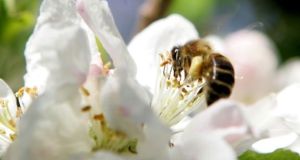 The group of insecticides found on the plants is linked to bee declines, according to a biologist at the University of Sussex. Photograph: Cyril Byrne

The discovery comes from the first study of pesticide residues in garden plants. Scientists tested 29 different “bee friendly” plants bought from stores such as B&Q, Homebase and Aldi in the UK. Most had the RHS “Perfect Pollinator Logo” and most contained so-called neonicotinoid pesticides (neonics).

“Seventy per cent of them had neonicotinoids, the group of insecticides linked to bee declines, including those banned in Europe for flowering crops,” said Prof Dave Goulson, a bee biologist at the University of Sussex, who led the study, which appears in the journal Environmental Pollution.

“It’s a worrying finding. The concentrations are within the range previously shown to cause harm to bees,” said Dr Jane Stout, biologist and bee expert at Trinity College Dublin. The chemicals could also harm beneficial insects such as ladybirds, she added.

The scientists tested flowers such as dahlia, lavender, catmint, salvia, strawberry, crocus and wallflower. They analysed leaves, pollen and nectar for insecticides and fungicides.

Twenty-three of 29 plants contained more than one pesticide; just two plants had none. A heather plant contained 10 different pesticides.

“If someone is buying flowers with a bee logo saying ‘perfect for pollinators,’ and they are actually full of neurotoxins known to be highly toxic for bees, there is something wrong,” Prof Goulson said.

Consumers should know what their plants have been treated with, said Dr Stout.

The doses were not high enough to kill bees, but could cause harmful effects, “including messing up their immune system and confusing them in finding their way back to their nest,” said Prof Goulson. Neonicotinoids are long lived in soil, so the pesticide-laden plants could contaminate gardens for years.

Irish farmers are barred from using certain neonicotinoid pesticides in bee attractive crops. “The impact of pesticides on beneficial insects has largely focused on agriculture, but this study clearly shows potential impacts from gardens and ornamental plantings,” said Dr Stout.

Gardens can be an excellent source of food for bees because of the variety of flowers and because people grow them throughout the year.

“Urban areas can support pollinators quite well, but if it is increasing their exposure to pesticides, it could be doing as much harm as good,” she said. What stood out for her was the cocktail of different chemicals found.

The fungicide residues found are not toxic, but impair the detox ability of bees. “If the bee feeds on the fungicide nothing happens. But combine it with insecticide and the insecticide becomes far more toxic,” according to Prof Goulson.

He advises gardeners to source clean plants by growing their own from seed, swapping plants with neighbours or buying plants from an organic nursery. Many bee-friendly plants are easy to grow.

“Unless garden centres can offer some guarantees that their plants don’t contain insecticides, I wouldn’t be recommending that people buy bee friendly plants from them,” said Prof Goulson. “I imagine the likes of Aldi and others have no idea that these chemicals are in the plants they are selling.”

He said he would be “astonished” if the situation was any different in Ireland. He suspects many retailers buy from the same big suppliers in continental Europe.

Dr Stout cautions that it is unclear how representative the flowers tested are of garden centres in Ireland, but she suspects it is an issue here. The UK study was crowdsourced, with members of the public contributing money, showing the public interest in bees and pesticides.

B&Q announced recently that it will ban growers from treating any flowering plants with neonicotinoids, as of February 2018. The decision, it says, is to help support wildlife and address the declining bee population. Most of B&Q’s growers are UK based, with the rest from continental Europe. Plants sold in Ireland are sourced from the same suppliers as those sold in the UK.

“B&Q is the first to commit to ensuring no neonicotinoid pesticides are used in the cultivation of flowering plants, particularly pollinators where they present the biggest risk of harm to bees,” the company said in a statement.