The battle to save Ireland’s birds 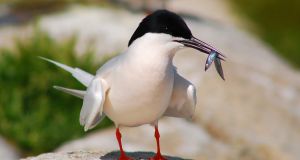 Roseate tern numbers improved thanks to a project that saw the Rockabill Island colony grow from 152 pairs in 1989 to 1,603 pairs in 2017. Photograph: Brian Burke

While frosty mornings are currently being shunned by some, birders nationwide are embracing the outdoors. Their reason? To help to paint a picture of how Ireland’s birds are faring.

Data from this and other surveys all feed into the production of the Birds of Conservation Concern in Ireland report. The most recent report, 2014-2019, saw 37 species on the red list, with 12 new additions such as the pochard, wigeon, dunlin and grey wagtail.

While the next report is due for publication next year, Brian Caffrey, assistant head of surveys and monitoring at BirdWatch Ireland, says there will likely be little change for these species.

“For many of the species on the red list, the bulk of them will probably remain there. We’ve not seen any significant changes that would take them off it,” he says. “However, we’ve only started the number crunching so it will be six months before we have more solid findings.”

According to Caffrey, we know that the decline of many species is ongoing.

“In the not too distant future, some of them could be gone off the red list, not because the declines have been reversed but because they have gone extinct in Ireland. That is really the severity of what we’re looking at. Curlew would be prime example.”

The starting point in addressing declines is figuring out why a species has declined in the first place, says raptor conservation officer with BirdWatch Ireland John Lusby. “For some species, that can be quite obvious. For others, the actual reasons are far more intricate and it takes focused research to determine why these populations are suffering.”

While every species faces unique challenges, there are some common factors for many of the red-listed species.

“When we look at species like yellowhammer, corncrake, curlew and barn owl, even though they are all different species and reliant on somewhat different habitats, one of the overarching factors behind their decline is the intensification of agriculture,” he says. “They present some of the biggest conservation challenges and there are no immediate fixes.”

A study published earlier this year found that the number of waterbirds wintering in Ireland had declined by 15 per cent over the past five years and by 40 per cent since the mid-1990s. A broad range of factors have led to this significant drop, Caffrey adds.

“They’re affected by everything, including climate change, pollution, the impacts of intensive agriculture, the loss of habitat for many of these species and things like recreational disturbance on the waterbodies they’re found on. To address these declines is really challenging and it requires a multipronged approach.”

Afforestation and other land-use changes, predation and exposure to rodenticides are some of the many other factors chipping away at bird populations.

While the situation for many species in Ireland is stark, it’s not all negative. For example, the previous BoCCI report saw the knot move from the red to the amber list due to “recent recovery of wintering populations”. According to Niall Hatch, public relations and development officer with BirdWatch Ireland, they are liaising with colleagues in other European countries to discover why.

“They’re mainly an Arctic breed and they have a huge range. Here in Ireland, there haven’t been too many changes to their wintering habitat,” he says. “What this suggests is something has changed on the breeding grounds or migratory routes.”

The roseate tern is a species that had made a complete turnaround owing to the Rockabill Roseate Tern Conservation project. This saw the Rockabill Island tern colony grow from 152 pairs in 1989 to 1,603 pairs in 2017. Conservation measures such as vegetation clearance and nestbox installation were influential in this growth.

This is acting as a feeder colony for other populations nesting in Europe, says Hatch. “The project is truly something to be proud of.”

According to Lusby, the Curlew Task Force and the Hen Harrier Threat Response Plan are steps in the right direction, as they target conservation to individual species that need them most.

“However landscape-scale conservation would see wider biodiversity benefits, and would prevent risk of extinction for species such as these in the first place, rather than taking action when the situation has become dire.”

Meanwhile, the recent focus on the importance of hedgerow preservation is having localised benefits for birds such as the yellowhammer, says Hatch, as has the Glas Wild Bird Cover Measure. Caffrey also notes the success of the agri-environment initiative.

“Anecdotally, we have a lot of people reporting they have seen a significant increase in the number of small seed-eating birds such as finches, skylarks and buntings, using these crop areas.”

Like other red-listed species, the barn owl’s decline is attributed to many factors, including agricultural intensification. Secondary poisoning from rodenticides is also a concern. Indeed, a Birdwatch Ireland/University College Cork study conducted on barn owl carcasses between 2007 and 2011 found that more than 85 per cent of 79 roadside carcasses had traces of rodenticides.

Recent research is increasing our understanding of other threats. A study of 423 recorded barn owl mortality incidents in the Republic between 2008 and 2017 revealed 312 (73.7 per cent) were attributed to vehicle collisions. Lusby, one of the researchers involved, notes there may be some bias as birds killed on roads are more likely to be found than those that die by other means. Perhaps more revealing were specific road mortality surveys.

“We estimated a mortality rate of 51 and 60 barn owls per 100km per year on the M8 Motorway and Tralee Bypass respectively,” says Lusby. “These figures are similar or higher than estimates from studies elsewhere in Europe. This is bearing in mind barn owl populations are lower in Ireland than elsewhere.”

Lusby and colleagues are working with Transport Infrastructure Ireland to apply these findings to new road schemes, with the aim of preventing or at least reducing collisions with barn owls. Using research tools, they aim to identify high-risk areas on new roads before they’re developed and as a result, implement mitigation measures.

“These measures will involve trying to preserve the conservation benefits of roadside verges,” says Lusby. “We saw from research that they can be important from a biodiversity point of view. Using GPS data, we learned that barn owls were attracted to roadside verges for foraging.”

Mitigation efforts will also see a strip of unsuitable habitat being created in the hard shoulder to encourage barn owls to concentrate foraging efforts further back from the carriageway.

While barn owl road mortality is a recognised problem globally, actual mitigation has been rarely implemented. Where it has, it hasn’t been effectively evaluated, says Lusby.

“We are leading the way, both in terms of research and in terms of the focus on mitigation, for future road developments.”