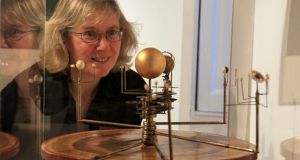 Science journalist Mary Mulvihill carried out a one-woman campaign to get us to think of ourselves as a scientific nation as well as a nation of writers. File photograph: Brian Dolan

Here are five books related to the history of science that you might want to put on your Christmas list.

Mary Mulvihill, Ingenious Ireland: A County-By-County Exploration of the Mysteries and Marvels of the Ingenious Irish (Four Courts Press)

Mary Mulvihill, a previous author of this column, was well known in scientific and journalism circles for her engaging approach to Ireland’s scientific heritage. This is a reprint of a much-loved and out of print book. It would be hard to overstate the impact that Mulvihill has had as a one-woman campaign to get us to think of ourselves as a scientific nation as well as a nation of writers.

In addition to her writing, she ran walking tours and presented a radio programme on the “Dead Zoo”. She also mentored other writers, such as this columnist. There is now an annual science-writing prize in her honour. And this book still stands as a wonderfully written introduction to Irish scientific heritage. Buy it for your American cousin doing a tour of the old country.

In this book O’Brien seeks out 12 species of hard-to-find birds that live in Ireland, weaving together memoir, ornithology and history. By looking for each bird in a particular place, he is able to tell stories of how history has shaped the landscape and affected which birds live there.

O’Brien is a confident and appealing guide, gently working his facts into the narrative. I was reminded of what the Dublin University Magazine said of the zoo during the19th century. Readers of this book will “learn, at least something […] while we are thinking only of amusement”. I learned lots. For your favourite armchair naturalist.

This children’s book is utterly charming but defies easy explanation. The introduction by O’Neill promises to take readers on “the greatest journey of them all” from the big science of the universe to the tiny science of cells and atoms.

There are four sections (the universe, planet Earth, the human body, and the very small) and within each section O’Neill introduces scientific facts and methods. The tone is conversational and in “Be a scientist!” pages he encourages young readers to explore the section’s theme on their own.

There are little snippets of history on almost every page that add texture and human interest. The illustrations are not only lovely, they really help to explain scientific concepts. Women are well-represented among named scientists and as characters in the illustrations. I’m not sure why O’Neill needs to be called “professor’”on the cover. That said, this is a book that most adults would enjoy reading to a child.

Tanya O’Sullivan’s book is more academic than the others on this list but for anyone with an interest in the history of science in Dublin it’s a must read. Each of O’Sullivan’s chapters pays close attention to the way that scientists in the late 19th century experienced the city while also providing stories about scientific ideas that you haven’t read elsewhere.

Aside from Dublin, the unifying theme is the idea of origins, but O’Sullivan does not restrict herself to debates about human evolution. She ranges from the idea of “ether” to the science of language, introducing some new characters while showing familiar figures in a new light. The book is very well written and beautifully produced. You read this column, buy this for yourself.

We may need to petition the series editor to include an Irish scientist in the next edition. Despite this omission, this is a worthy project and part of “The New Historia” project which seeks to recover and publicise women’s contributions. The book does an excellent job of providing scientific, historical and cultural variety from a Senegalese computer scientist deceased in 2008 (Rose Dieng-Kuntz) to an Italian physics professor who died in 1778 (Laura Bassi). I found some of the biographies predictable (trails were blazed and fate was twisted) and others too celebratory (Margaret Sanger’s eugenical ideas are not mentioned). Despite these quibbles, there is plenty to enjoy here. Buy it for a man.

FG and FF back transition payment for those retired before qualifying for State pension 21:28
Scientist says methane from farming should be treated differently to CO2 21:03
Irish Times poll: Large majority want change of government 21:00
Nearly 2,000 more students register to vote, says USI 20:38
Councillors back plan for Magdalene laundry to be third-level college 20:23