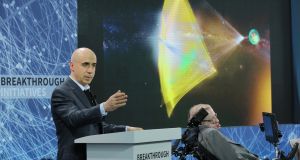 An exciting programme called Breakthrough Starshot is under way to fly tiny probes to Alpha Centauri or Proxima Centauri, the nearest stars to our solar system (4.37 light years away) in the mid-2040s. If successful, the probes will relay scientific information back to Earth about Alpha Centauri, or about Proxima Centauri and its orbiting planet. However, the primary motivation behind the project is the adventure of sending the first man-made object to an extrasolar star. Breakthrough Starshot is described by Ann Finkbeiner in Scientific American, March 2017.

The Starshot programme is the brainchild of Yuri Milner, Russian-born Silicon Valley billionaire-physicist. Milner has assembled an advisory committee of experts in all relevant areas pertaining to the project and is pumping in $100 million (€91.6 million) to get the project going. The Starshot programme is impressively practical and, although the necessary technology has yet to be developed, the project is based on established engineering and insults no laws of physics. Milner hopes Breakthrough Starshot will grow into an international collaboration.

A conventional rocket would take 30,000 years to reach Alpha Centauri, but Starshot will get there in 20 years, travelling at 20 per cent of the speed of light. On arrival, Starshot probes will fly past the target taking pictures and measurements and transmitting the data on a 4.37 year-long journey back to Earth.

The probes are small 15mm-wide multifunction chips (Starchips), each weighing about 1 gramme and attached to a flimsy 4 metre-wide light-sail. The tiny microchip must be able to collect and send back information to Earth, carry its own battery and survive the long journey. The chips will carry four cameras (light sensors), computers and means of transmitting data back to Earth, possibly a spectrograph and magnetometer to study stellar/planetary chemistry and magnetic fields. The information collected must arrive back on Earth sufficiently strong to be decipherable – a really hard problem.

The probes will be propelled by bouncing laser light off the light-sails. The laser light will be 99.9999 per cent reflected from the light-sail, propelling the probe forward like returning a tennis ball exerts force on a tennis racket. A reservoir of probes will first be placed in Earth orbit and one probe released daily from this reservoir over a three-year period to be zapped by the Earth-based laser for a few minutes, accelerating it to 20 per cent of the speed of light towards Alpha or Proxima Centauri.

The laser is the most expensive part of the project. It calls for a 1km square array of 100 million small lasers whose beams combine coherently into a single 100 gigawatt beam that zaps the probe. The technology required to build such a laser and focus the beam for several minutes on a 4 m² light-sail 60,000 km above the Earth will be very expensive to develop.

The light-sail must be extremely thin – about the thickness of a soap bubble – and yet able to withstand an acceleration of up to 60,000 times Earth’s gravity and also dust particles in interstellar space punching holes in it.

As things stand, nobody claims that the scientific information that can be harvested by Starshot is great. Alpha Centauri is a binary star system, both stars similar to our sun. Scientific understanding of such stars is already good and the extra information garnered from Starshot would not justify the cost.

Granted, the planet associated with Proxima Centauri, which may be habitable, is scientifically interesting and Starshot could as readily be targeted at Proxima as at Alpha Centauri. In that event, Starshot would look at the planet’s atmosphere and magnetic field in the few minutes it takes to fly by the planet. But, as Finkbeiner explains, much more information on this planet could be gathered by building an optical telescope in space and observing the planet for months.

Freeman Dyson, the eminent mathematical physicist, is on the advisory committee of Starshot and spoke to Finkbeiner. Dyson thinks the project is scientifically “silly” but considers that the laser-driven light-sail concept makes sense and should be developed. He thinks we should focus on exploring our solar system with this technology where the probes would travel at slower speeds and be driven by less powerful lasers. However, there is no denying the enthusiasm generated by the adventure of flying the first man-made device to the stars.

William Reville is an Emeritus Professor in Biochemistry at UCC