How William Harvey taught the world how the heart works 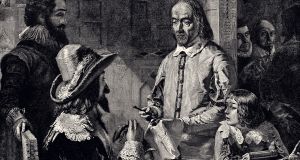 William Harvey demonstrating the circulation of the blood. Photograph: Getty

William Harvey (1578-1657) performed the greatest-ever medical experiments, giving birth to the science of physiology, when he discovered the circulation of blood, completely revising the description of Galen (129-200), the Greek physician and anatomist whose ideas dominated western medicine for 1500 years.

Born in Folkestone, Kent, Harvey graduated from Caius College Cambridge with a BA in 1597 and entered the University of Padua in 1599 where the great European anatomist Hieronymus Fabricius taught. He returned to London aged 24 as a doctor of medicine and married the daughter of Lancelot Browne, the Royal Physician. Harvey was appointed to London’s Saint Bartholomew’s Hospital, and established a practice whose patients included King James I, King Charles I and Sir Francis Bacon.

Galen’s description of the blood system was still taught in medical schools in Harvey’s time. Galen taught that are two types of blood carried by two different vascular systems. One, a nutricious fluid that encourages growth was made in the liver and flows through the body’s blue-coloured veins. A second red fluid moves through the heart and arteries, activating muscles and stimulating movement.

Most people did not believe him and many, the social media keyboard warriors of the time, ‘hounded him like dog’. Some things never change

Galen thought the two kinds of blood move back and forth like the tides. The blood vessels, animated by a vital spirit, expand sucking up blood and when they contract blood flows the other way. And the heart passively expands and contracts with the ebb and flow of the tide.

Harvey noted that the heart has two beats, the systole when it contracts and the diastole when it expands. The heart contracts and pales on the systolic beat as blood is squeezed out. When it expands on diastole it reddens again as blood flows back in. Putting his finger on an artery he felt it expand as the heart contracted. When he cut an artery in a living animal, blood spurted out as if driven by a syringe. The heart is a pump driving the system.

Fabricius, Harvey’s teacher, had shown that arm and leg veins have built-in valves and thought these valves slowed blood to prevent gorging. However Harvey showed that the veins were actually one-way avenues. He inserted a thin probe into a vein and pushed it in a direction away from the heart. The motion was resisted. But the probe slid easily along when pushed the other way. Harvey concluded that the heart pumps blood out through the body through the arteries and the veins return blood to the heart.

Blood circulation is a central pump placed in a circuit of closed tubes (see diagram). The right side of the heart pumps blood through the lungs, the left side pumps blood through the body. Blood containing oxygen picked up in the lungs, and other nutrients, is pumped around the body where the oxygen and the nutrients are unloaded and carbon dioxide picked up. The oxygen- depleted blood is returned to the heart through the veins and pumped on through the lungs where fresh oxygen is picked up and carbon dioxide is unloaded before the cycle starts again.

Harvey described the circulation in his masterwork On the Motion of the Heart and Blood in Animals in 1628. Most people did not believe him and many, the social media keyboard warriors of the time, “hounded him like dog”. Some things never change.