Pushing up the daisies . . . literally

A new, greener, option for disposing of human remains is to turn the corpse into a compost suitable for fertilising garden soil 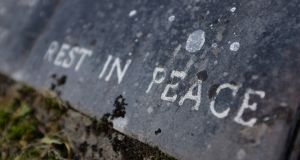 Traditional burial remains the choice for dealing with the majority of deaths (almost 80 per cent) in Ireland. Photograph: Bryan O’Brien

I am of an age that calls on me to attend funerals more frequently than I would like. This has sharpened my interest in how human bodies are handled after death. I wrote about burial before in thiscolumn where I compared and contrasted traditional burial and cremation. Traditional burial remains the choice for dealing with the majority of deaths (almost 80 per cent) in Ireland but cremation is catching up fast (20 per cent of all deaths in Ireland, 77 per cent in UK) as a popular choice. A very small minority have a “natural” burial.

A new option for dealing with human corpses has now arrived in America and may become available in Ireland relatively soon – composting the corpse to a humus suitable for fertilising garden soil. If you opt for composting, you can look forward to be literally “pushing up the daisies” within a few weeks of death.

A traditional burial involves chemical preservation of the corpse (embalming), burial in a sturdy coffin in an approved graveyard and marking the grave with a substantial gravestone.

Natural burial, sometimes called green burial, involves burying the un-embalmed corpse in an easily biodegradable shroud or flimsy casket in an approved site, marking the spot with a simple marker and letting the grass grow over the site as a natural meadow. Cremation means burning the corpse completely to ash in a high-temperature oven and either scattering the ashes in a place of personal meaning to the deceased’s relatives, or holding the ashes in an urn.

Current changing patterns of dealing with human remains are driven mainly by two factors – environmental considerations and cost. Traditional burial usually involves embalming chemicals (eg formaldehyde) that are eventually released to the environment, and committing scarce space to graves indefinitely. And even a modest funeral will cost €5,000. Cremation releases greenhouse gases and vaporised chemicals such as mercury to the atmosphere, but can cost as little as €1,000. Natural burial involves minimal emissions to the atmosphere and the grave returns to natural meadowland.

Composting is a well-known gardening technique involving the natural decomposition of organic materials, eg garden waste and food vegetable scraps, into an earthy material called compost. Animal carcasses can also be composted. Compost is rich in nutrients and is ideal as a garden soil conditioner for growing plants.

In May 2019, Washington State in the US legalised the composting of human bodies. The composting will be done by a Seattle company called Recompose and it plans to begin operations in 2020. Recompose manufactures composting pods in which the corpse is placed, heaped with straw, alfalfa and wood chips. Oxygen is then pumped in to enhance and accelerate the decomposition of the body by naturally occurring bacteria. To quote Recompose: “Over the span of about 30 days the body is fully transformed, creating soil which can then be used to grow new life .”

An adult human body will yield a cubic yard of fluffy compost, four large wheelbarrows-full. The compost can be taken away by relatives and used as they wish, eg keeping some in a memorial urn, but it is anticipated that compost will be mostly used in the garden. Composting will cost slightly less than traditional burial and have a lower carbon footprint than burial/cremation options.

Recompose claims there is a spiritual dimension to composting. “By allowing organic processes to transform our bodies into a useful soil amendment we help to strengthen our relationship to the material cycles while enriching the Earth.” But, of course, all methods of dealing with human remains return the chemical constituents of the body to the earth, relatively slowly in traditional burial; faster with natural burial, and faster again in cremation and composting – “ashes to ashes and dust to dust”.

As I argued previously, I strongly favour the option of traditional burial. I believe the dead retain the right to remain standing among us. Traditional burial/graveyards/gravestones are physical reminders of our dead, prompting memories of their personalities, values and wishes. Natural burial leaves little physical reminders of the dead and cremation and composting a lot less. We must be careful not to create a world in which our own personal lives are the only thing that matters.