What do we replace plastic with? Trinity scientists seek answers 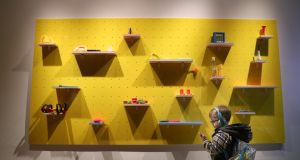 So, you’re finally going to do it. After years of talking about it, you’ve decided to take a bold step for the environment by eliminating all plastic and other non-sustainable materials from your life. Well done you. You start with the plastic food containers and shopping bags - all gone.

Then it’s onto drinking straws, plastic utensils and bowls, cotton buds and shampoo bottles. But it doesn’t stop there. There are the kids’ toys, the CDs and DVDs, the electrical appliances, and all the computer equipment. Oh, and the toothbrushes will have to go too, along with all your inhalers, thermometers and other medical devices.

You’ll also have to rip out all the toilet seats, and tear down the guttering around your house. And are those smoke detectors made of plastic? We’ll just have to take the risk – if the house burns down at least we’ll have the comfort of knowing we did our bit to save the planet.

Pretty soon, your house is empty of all plastics, but now you’ve nothing to eat or drink out of, nothing to brush your teeth with, your kids have no toys to play with, and for some reason there’s rainwater dripping down the walls. Suddenly, you’re asking yourself, how did we ever survive without plastic? And what on earth are we going to replace it with?

It’s one thing to say we need to reduce plastic waste, but it’s quite another thing to put it into action. The problem with plastic is, it’s so darn handy that in many cases it’s hard to find a substitute. Experts are quick to admonish us for our over-reliance on this toxic but incredibly useful substance; however, they are strangely slow on offering alternatives.

In March, the European Council voted overwhelmingly to ban a range of single-use plastics by 2021, including drinking-straws, forks, knives and cotton buds. So we’re going to have to find another way to sip our soda, eat our deli salad, and clean out our ears. That’s probably doable, and it’s a start, but what will happen when more essential plastic items are banned?

The current exhibition at the Science Gallery in Dublin grapples with the big dilemma facing a world dependent on this magical but also cursed material. Plastic: Can’t Live with It, Can’t Live without It looks at how plastic has changed human lives over the last century, and how it has created unique problems for the world.

As the exhibition’s organisers observe, plastic is ridiculously cheap to make, but prohibitively expensive to dispose of, and even though many plastic products are designed to be used only once, they will stick around in the environment long after you’ve finished guzzling that fizzy drink.

Scientists at Amber, the Centre for Advanced Materials and BioEngineering Research at Trinity College, have joined the hunt for viable alternatives to plastic, expanding their remit beyond MedTech, energy and ICT and into the area of sustainable materials.

This year, the centre announced its next phase of funding from Science Foundation Ireland of €40 million, part of which will go towards researching new materials that can be recycled, recovered, reused or remade, cheaply and cleanly. We all want to reduce our reliance on fossil fuels, reduce waste, and change society from a throwaway culture to a recycling culture, but we need the tools to do it, and Amber is hoping that, through its innovative research, it can provide some of those tools.

On the face of it, this may seem a Sisyphean task, but, as Prof Mick Morris, director of Amber, explains, the centre intends to use the funding to think outside the box and come up with innovative ideas for a future carbon-free society.

“It’s a lot of money, and it’s a lot of responsibility, and I think we need to spend it wisely. When we started planning how to use this money, we kind of had a look and said, what are the challenges the country faces right now, and the companies in the country face?

“Because the landscape is going to change so much over the next six years. I think everyone is aware of single-use plastics, that they’ll be banned next year. But I don’t think people understand how deeply that goes. So it’s easy to say, well, you know, plastic cups at the soda fountain, okay, we can live without those, that’s quite simple, but what do we do about things like pregnancy test kits? Or syringes? So there are real challenges there in terms of just sustaining the current technology.”

Ireland is far behind the curve, due to its poor record in plastic recylability, but the new EU rules may force us to play catch-up pretty fast, reckons Morris. “We will not be allowed to export our recycling, and we’ll have to recycle 90 per cent of our own waste. So we’ll need to have the technologies.”

“There are also philosophical questions which I don’t think are being discussed at length, for instance, should we be replacing plastics? One of the materials that people are saying can replace plastic is cellulose. So cellulose has been around for ages. And its natural in that it comes from trees. But if you look at how much energy goes into turning a tree into a polymer, it does not become practical.

“Because we make these things so complicated we can’t easily de-programme them back to the raw chemicals and then remake them. Recycling a pile of mixed polymers and turning it into weatherboards for your decking really isn’t an answer. It’s very easy for scientists to go, well, you know, I can make a polymer out of mushrooms. You can, but not if it takes so much energy or so much other carbon that it effectively works as the polymer that you were trying to replace.”

That’s where we have to be clever, Morris adds. “You don’t throw away gold because it’s a resource, so when it comes to plastics, we have to think about exactly when it makes sense to just say, well, this is such a valuable resource, we’re going to reuse it.”

Letting go of the Lego

Ask anyone aged five to 15, and they’ll tell you what’s the most valuable plastic item on the planet: Lego. Okay, it’s not as precious as gold, but kids still covet it like little Midases. Many homes are clogged up with the stuff, which has piled up over many Christmases and birthdays, but if you look at the price of an average Millennium Falcon or Death Star, you wouldn’t dream of throwing them out.

Lego has been actively working towards creating an alternative material to make their iconic bricks, but meanwhile, what’s to be done with all the petroleum-based bricks already out there?

Melting them down and making them into something else would be environmentally disastrous and completely impractical, so Lego recently announced a new pilot programme in the US that will make it easier for people to donate their unwanted Lego to schools in poorer communities.

“We saw people really wanted to donate their bricks, but one of the things they said was, if we give you our bricks, from the environmental perspective, we don’t want you to grind them up and make outdoor furniture or something else from them,” said Tim Brooks, Lego’s vice-president of environmental responsibility.

Under the Lego Replay programme, the company is providing free shipping labels for anyone who wants to donate unwanted Lego bricks, and Lego’s partner charity will look after cleaning and sorting the bricks and delivering them to schools and kids’ clubs in lower-income areas in the US.

Many Irish parents wading through Lego pieces will welcome the arrival of a similar programme here, but first we’ll have to persuade our kids to part with their precious bricks.