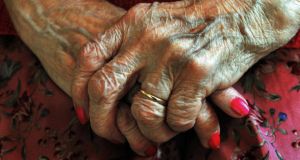 A new study of longevity trends in 35 industrialised countries shows that people in all countries can expect to be living longer. Photograph: John Stillwell/PA Wire

Human life expectancy continues to grow, despite our collective taste for fast food and too much sugar.

A new study of longevity trends in 35 industrialised countries shows that for some of us, 90 years will become the new normal.

The analysis shows that a baby girl born in South Korea in 2030 will have an expected lifespan of 90.8 years. Her baby boy counterpart born in that year will likely live to 84.1 years of age.

The study by scientists from Imperial College London in collaboration with the World Health Organisation is published on Wesnesday in the journal the Lancet.

It showed that people in all countries can expect to be living longer, although some more so than others.

Irish men born in 2030 will live to an average 84 years old, putting them in eighth place out of 35 countries. Irish women born that year will live to about 87 years, 14th in the age rankings.

The bottom of the women’s table is held by Macedonia, Serbia and Bulgaria and none of these will have hit the 80-year lifespan by 2030.

Other advanced countries like the US also lag behind with an average for women of 83.3 years and men 79.5, the numbers held back by high child and maternal death rates, homicide and obesity.

Scientists once thought life expectancy beyond 90 was impossible, said project leader Prof Majid Ezzati of Imperial. He takes a different view given these numbers.

“I don’t believe we are anywhere near the upper limit of life expectancy – if there even is one,” he said.