Stan Ulam, a mathematician who figured how to initiate fusion

That’s Maths: from the Manhattan Project to the Monte Carlo method 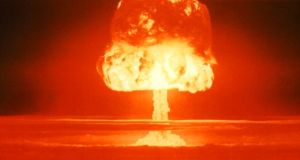 Stanislaw Ulam, born in Poland in 1909, was a key member of the remarkable Lvov School of Mathematics, which flourished in that city between the two world wars. Ulam studied mathematics at the Lvov Polytechnic Institute, getting his PhD in 1933. His original research was in abstract mathematics, but he later became interested in a wide range of applications. He once joked he was “a pure mathematician who had sunk so low that his latest paper actually contained numbers with decimal points”.

In the preface to his autobiography, Adventures of a Mathematician, Ulam expressed his surprise at how “a few scribbles on a blackboard or on a sheet of paper could change the course of human affairs”. This was starkly illustrated by his work on atomic weapons. In 1935, John von Neumann met Ulam in Warsaw and invited him to visit the Institute for Advanced Study in Princeton, New Jersey. In 1944, Ulam was recruited to work on the Manhattan Project. He remained at Los Alamos after the war and played a seminal role in the development of the H-bomb. He discovered a way to initiate nuclear fusion, originating the Teller-Ulam design for thermonuclear weapons.

Ulam exploited the power of one of the earliest electronic computers – Maniac – exploring patterns of growth, non-linearity, complexity and chaos. He discovered the idea of cellular automata, systems that can simulate a broad range of physical processes. He was among the first to realise that, with electronic computers, statistical methods can yield answers to many otherwise intractable problems. He devised a system of computation using random numbers. Through an analogy with gambling, this computational technique was dubbed the Monte Carlo method.

The method has become a standard technique in numerical science, and is found in many computational software packages. In addition to applications in physics and mathematics, it is used to solve problems in finance, social science, environmental risk assessment, linguistics, and medical diagnostics.

With Enrico Fermi and John Pasta, Ulam studied a simple mechanical problem of a line of masses linked by springs. They anticipated that the energy would be rapidly distributed to all possible modes of vibration. Instead, they found the system returned periodically to its initial state. Such behaviour is different from the expected equipartition of energy. The Fermi-Pasta-Ulam (FPU) problem became a standard example of recurrence in the field of nonlinear science. This work has been described as “the birth of experimental mathematics”.

Starting with the publication of his first paper as a student in 1929, Ulam was constantly writing on mathematics, publishing more than 150 mathematical papers. Some of the main areas of mathematics that he studied were set theory, topology, group theory, number theory and graph theory. One important theorem bearing his name is the Borsuk-Ulam theorem in topology, which concerns continuous mappings on a sphere. A curious practical consequence is that, for pressure and temperature on the Earth’s surface, there must be at least one pair of antipodal points (points diametrically opposite to each other on the globe) having identical values of both pressure and temperature.

In 1984, aged 75, Ulam died suddenly having suffered a heart attack. He had once joked with his wife Françoise that he hoped to go either this way or “to be shot by a jealous husband”.

Peter Lynch is emeritus professor at UCD School of Mathematics & Statistics – be blogs at thatsmaths.com