An Irish Twist on ‘The Secret of Life’ 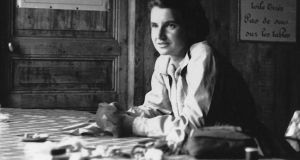 Rosalind Franklin in 1950. She, like Crick, had realised that DNA had a double helix structure. Photograph: Vittoria Luzzati/NPG 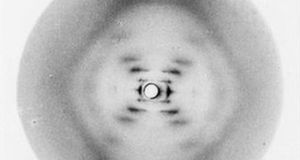 A critical component of the discovery of the structure of DNA was ‘Photograph 51’, probably the most influential (and controversial) X-ray photograph ever taken.

When Barack Obama used a model of deoxyribonucleic acid (DNA) in his 2016 State of the Union Address to introduce the concept of “Precision Medicine and the Cancer Moonshot”, he could hardly have realised, in a way, he was fulfilling the wishes of the first person to take an X-ray picture of DNA, just over 65 years before.

Raymond Gosling was a PhD student, initially in the laboratory of Maurice Wilkins at King’s College London, but was subsequently supervised by Rosalind Franklin, who was responsible for much of the X-ray crystallography work that led to James Watson and Francis Crick announcing in the Eagle Pub in Cambridge on February 28th, 1953: “We have discovered the secret of life.” Gosling had hoped to continue to work on DNA and saw it as a way to cure cancer, but drifted away from this field, which probably partially explains his lack of recognition for the iconic discovery. Franklin’s exclusion from the pantheon of the greats is a different matter.

Next week marks the 65th anniversary of the publication A Structure for Deoxyrobonucleic Acid by Watson and Crick in the journal Nature on April 25th, 1953. What is not widely known is the significant Irish connections to probably the greatest scientific discovery of the 20th century. To start the Irish twist on DNA, we have to go back a decade from Watson and Crick’s prophetic statement in the Eagle pub, to the Dublin Institute for Advanced Studies (DIAS). Nobel Prize winner for physics Erwin Schrödinger (who, in an incredible act of foresight promoting fundamental research, had been invited to Dublin by taoiseach – and mathematician – Éamon de Valera to help establish the institute) posed the fundamental question “What is life?” in a series of public lectures, published in book form the following year. Schrödinger emphasised how chemistry and physics could be applied to biological processes and provided a theoretical description of how genetic information could be held in a molecule.

What Is Life? The Physicists’ Approach to the Subject had a fundamental effect on the three people who would go on to win the Nobel Prize for physiology or medicine in 1962. Wilkins had worked in the US on the Manhattan Project but, once he read the book, switched his attention to study of biological processes. Crick highlighted how it had influenced his thinking on the storage of genetic information, while Watson read it as a 17-year-old student in the biology library at the University of Chicago – and it changed his life. He told The Irish Times in 2015, “In a way Éamon de Valera made me”; emphasising the enormous influence Schrödinger had on his career.

A critical component of the discovery of the structure of DNA was “Photograph 51”, probably the most influential (and controversial) X-ray photograph ever taken. Produced by Franklin and Gosling, it provided crucial evidence for the double helical structure of DNA, recognised immediately by Watson (there is no doubting his genius in this regard) when he was shown the photograph by Wilkins (without Franklin’s knowledge or, more importantly, her consent). That X-ray crystallography played such an important role in deciphering the structure of DNA is down to an Irish man, born in Nenagh, Co Tipperary. JD Bernal was a true renaissance man, known in his student days in Cambridge as “Sage”, a nickname that stuck because of his encyclopedic knowledge of pretty much everything.

He is rightly considered the father of X-ray crystallography of biological materials. Bernal did groundbreaking work with Dorothy Hodgkin (who went on to win the Nobel Prize in 1964, at that time only the fifth female scientist to do so). He also taught/mentored Nobel Prize winners Wilkins and Max Perutz. At Birbeck College, he took Rosalind Franklin under his wing following her somewhat acrimonious departure from King’s. It was he who wrote Franklin’s obituary for the Times when she died at the young age of 37.

In it he described her X-ray crystallographic pictures, as “amongst the most beautiful X-ray photographs of any substance ever taken”. Watson has frequently said that without Bernal’s development of the science of X-ray crystallography, they would never have solved the structure of DNA. In 2013 when Watson addressed the Royal Irish Academy, he generously said, “If Bernal hadn’t existed, I wouldn’t be here now!” Pity he hadn’t been as generous in his portrayal of Franklin, or Rosy as he insisted on calling her (a name she detested) in his bestseller The Double Helix. One thing that is surprising is the fact Bernal himself never won a Nobel Prize; his communist politics probably didn’t endear him to the establishment.

The final significant Irish “link” to the discovery did win a Nobel Prize, but a quirk of geographical location meant Maurice Wilkins didn’t become the first Irish Nobel Prize winner for Physiology or Medicine. Although he was born in New Zealand, Wilkins’s parents, Eveline and Edgar, were born in Ireland and had arrived in New Zealand only three years before. The family subsequently moved back to Dublin and would have been very happy to settle there, except that there were more opportunities for Wilkins’s father in London.

Wilkins’s grandfather taught WB Yeats at the High School in Dublin, and many of Wilkins’s relations attended Trinity College, near DIAS. Given future developments in relation to Franklin being allegedly discriminated against by Wilkins, Watson and Crick, it is ironic that Wilkins’s uncle established the Wilkins Prize in Mathematics for women at TCD. Watson also had an Irish connection – his grandmother Eileen Gleeson was from Co Tipperary.

This April also marks the 60th anniversary of Franklin’s death. That she and Gosling published the iconic Photograph 51 in in the same issue of Nature as Watson and Crick’s seminal paper makes it all the more surprising that neither Watson, Crick nor Wilkins saw fit to recognise her obvious contribution in their Nobel Prize acceptance speech. Thankfully, she had her day in the sun posthumously, when her protégé Aaron Klug emphasised her contribution to his work during his 1982 Nobel acceptance speech. He remarked: “Had her life not been cut tragically short, she might well have stood in this place on an earlier occasion.” He had also previously highlighted a draft of a paper on the potential for a helical structure of DNA that she had written; dated March 17th, 1953.