Imagine two cities on the equator. What’s the quickest route between them?

That’s Maths: Flight planners, astronomers and satnav all rely on geodesics and the effect of Earth’s bulge 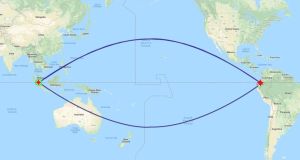 Flight plan: the geodesic arcs – one northerly, one southerly – show the shortest routes between Singapore and Quito. They are shorter than the line of the equator between the two points as Earth is not a perfect sphere

Geodesy is the study of Earth’s shape and size, and of variations in its gravitational field. Earth was originally believed to be flat, but many clues, such as the way ships appear and disappear on the horizon, and the changed perspective that height gives, as well as astronomical phenomena, convinced savants of its spherical shape. In the third century BC Eratosthenes accurately estimated Earth’s circumference.

The great French philosopher René Descartes had a brilliant idea that enabled him to give a name to every point in a plane. He fixed one point, called the origin, and drew two lines – the axes – through it and at right angles to each other. The distances of any point from these axes give a pair of numbers (x, y), which we call the Cartesian co-ordinates.

They act to label every point, identifying it uniquely. The theorem of Pythagoras then gives the distance from the origin to the point; the square of this distance is the sum of the squares of x and y. Descartes’s idea had far-reaching consequences and served as a grand unification of algebra and geometry.

Bernhard Riemann discovered a sweeping generalisation of the Pythagorean theorem. He considered points in a multidimensional space and allowed this space, or manifold, to be curved, not flat like the Euclidean plane. Riemann then wrote an expression for the distance between any two points in his manifold. This expression was analogous to the theorem of Pythagoras but much broader in scope.

A simple way to visualise Riemann’s curved manifold is to think of Earth’s surface. We learn in Euclidean geometry that a straight line is the shortest distance between two points. So the shortest route from Dublin to Melbourne is a line passing close to Earth’s centre. But traversing this path poses certain difficulties. In practice we must travel on, or slightly above, Earth’s surface. The shortest route is then a great circle; its centre is at Earth’s centre, but we travel via an arc along the surface. This path is called a geodesic.

But Earth is not exactly spherical. The closest simple mathematical shape is a flattened sphere or oblate spheroid. To determine the shape precisely the French Academy of Sciences organised a geodetic expedition in 1735 to measure the meridian arc in polar and tropical regions. This confirmed that Earth was slightly flattened like an orange, not elongated like a lemon.

Excepting any two antipodal points, the geodesic, or minimal-distance route, between any two locations on a sphere is uniquely determined. When we make allowances for the slight flattening of Earth, however, something curious happens: the shortest route is no longer unique. For example, Singapore and Quito both lie on, or very nearly on, the equator, but Earth’s bulges mean the equator’s line across the Pacific is not the shortest route between them: there are two shortest routes, one to the north of Hawaii and one to the south over Australia.

The effect of nonsphericity is small, but, given the price of aviation fuel, it is important for planners of long-haul flights. It also has consequences for astronomy, time measurement, mineral surveying, determining the positions of artificial satellites, and GPS.

Peter Lynch is emeritus professor at University College Dublin’s school of mathematics and statistics. He blogs at thatsmaths.com