Mesmerising: The power of the human mind to respond to suggestion 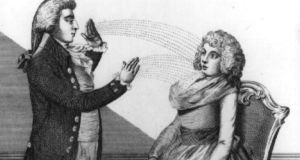 Many women reacted strongly to Anton Mesmer’s magnetic therapies; some of them convulsing or falling unconscious.

In 1778 Anton Mesmer arrived in Paris. He had left Vienna under a cloud when his new practice of animal magnetism raised objections among medical practitioners. Mesmer claimed to have discovered an invisible fluid that circulated in and through the world and living beings that he called “animal magnetism”. Control of this fluid, according to Mesmer, held the key to promoting health and eliminating disease. Mesmer was not an ordinary quack: he held both a medical qualification and a doctorate.

Further, the idea of harnessing electricity and magnetism for medical effects was not in itself outlandish. Similar ideas were put forward by other medical practitioners and scientific men. Mesmer, however, combined his ideas with a flair for the dramatic that orthodox medicine found distasteful and the public found intriguing.

Parisians embraced Mesmer as a phenomenon, even if many were sceptical of his methods. He was soon a prominent figure in the city and his cures widely discussed and depicted in print and visual culture. Medical men debated the soundness of his science but Queen Marie Antoinette offered him a salary and a pension. Mesmer refused because the queen required he be supervised by appointed physicians; a condition he considered demeaning. Instead, he attracted a patron (Nicholas Bergasse, later a figure in the French Revolution) and began to hold therapeutic seances. The funds generated from the treatment of patients privately and in these seances insured a healthy income for Mesmer.

At a therapeutic seance, attendees would sit around a tub filled with magnetized fluid and iron filings from which protruded a number of metal poles. Patients applied a metal pole to the affected part of the body in order to relieve their symptoms. They also were often connected to one another, either by touch or by a rope, in order to connect their animal magnetisms for maximum effect.

In addition to the conduction of magnetic fluid through tubs, Mesmer also cured individuals by sensing and removing obstructions to the flow of animal magnetism through their body. When he first discovered animal magnetism Mesmer had used magnets applied to different parts of the body. However, by the time he had arrived in Paris he was convinced of his ability to control animal magnetism himself, without magnets. He would apply his hands to parts of the body that he identified as key locations for promoting flow.

Many of the patients were women, believed at the time to suffer disproportionately from nervous dispositions. They reacted strongly to Mesmer’s actions, some of them convulsing or falling unconscious. Mesmer appeared to have some control over their behaviour, a possibility that both titillated and horrified. The risqué aspect of the act (a man touching a woman who was not wife or family in the full view of others) appeared to be part of its attraction.

Mesmer’s popularity and his claims of miracle cures also attracted the attention of the Royal Society of Medicine and the Royal Academy of Sciences. They demanded an investigation of Mesmer on their own terms (Mesmer had in fact requested a trial in his search for official approval). Among those selected to assess Mesmer’s healing claims was Benjamin Franklin, famous of course for his experiments with the electrical properties of lightning. The investigation dismissed Mesmer and his claims.

This was neither the end of the therapeutic use of magnets and electricity nor the end to mesmerism and animal magnetism. Mesmer was one of the most successful popularisers of ideas about the relationship between electricity and the human body. Other investigators had linked the raising and lower of the human pulse to positive and negative electrical charges in the atmosphere. Experiments in medical electricity involved creating a charge on patients using friction and then discharging the electricity created onto a metal pole (an elaborate version of walking across a carpet and then touching something hard which gives you a zap). Such treatments were considered effective in cases of epilepsy and stroke.

Followers of Mesmer were welcomed in Britain and Ireland where they toured the country offering sensational shows (somewhat similar to hypnotism shows today) and setting up temporary clinics. As late as the 1850s, a doctor in Britain claimed to use animal magnetism to anaesthetise patients undergoing dental extractions. At the very least the success of mesmerism is a testimony to the power of the human mind to respond to suggestion.