Take a trip to see the bigger picture 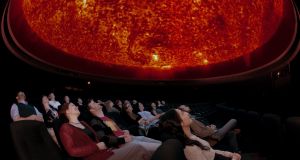 An immersive experience at the Peter Harrison Planetarium at the Observatory in Greenwich, London. Photograph: © National Maritime Museum, London

Travel broadens the mind, and what better way to see the big picture than a trip away to learn more about the Universe. If your journey takes you to London, be sure to reap the astronomical bounty of Greenwich, where maritime and astronomy museums lie within easy walk of each other.

Greenwich is well served by public transport, and you can get there relatively easily from the centre of London by bus, train or (my favourite option) the ferry along the Thames, which leaves you right next to the Cutty Sark.

Stars of the navy

A stone’s throw from there lies the Old Royal Naval College and its Painted Hall, a large vestibule adorned with paintings on walls and ceiling. Its current restoration means you can go on a scaffolding tour to closely peruse the pomp, politics and propaganda of the ceiling mural by artist James Thornhill.

The dramatic ceiling artwork features royalty mingling with Greek and Roman gods and goddesses, figures from the zodiac, and if you look closely in the corners, Titans of astronomy.

Why was astronomy so important for the navy? Because, at a time long before GPS, the Moon, planets, Sun and other stars provided crucial clues for navigation.

In the mural, one of the last “naked eye” astronomers, Danish nobleman Tycho Brahe, sits diametrically across from Galileo, whose use of the telescope opened new windows of understanding on celestial bodies.

Revolutionary mathematician and astronomer Nicolaus Copernicus and Royal Astronomer John Flamsteed are featured too; the latter alongside his correct prediction for a solar eclipse in 1715 shortly after the painting was finished.

Flamsteed is also a mainstay of the Royal Observatory in Greenwich, which is within walking distance of the Painted Hall.

Its hilltop vantage point offers a photo-friendly backdrop of London on a clear day and at the Observatory you can learn more about Greenwich Mean Time (GMT), as well as time more generally. Be sure to stand with a foot on each side of the Prime Meridian so you can be on both “sides” of the world at the same moment – see www.rmg.co.uk/royal-observatoryThe Peter Harrison Planetarium at the Observatory is well worth a visit too – short films on its domed ceiling are a treat for kids and adults alike, and a member of staff is typically on hand to answer questions afterwards.

On my family’s most recent visit we learned about the surface of the Sun and how solar flares can affect communications and power on Earth, but check the website for current listings – see www.rmg.co.uk/see-do/planetarium-shows

There are, of course, plenty of sites in Ireland steeped in astronomy too. They include CIT Blackrock Castle Observatory – bco.ie – in Cork, where you can learn about the cosmos and extreme life forms, and Birr Castle Gardens and Science Centre in Co Offaly, home of the historic Leviathan telescope, which was built in the 1840s and was the largest in the world for 70 years, and the new I-LOFAR (Irish Low Frequency Array) telescope built to detect low-frequency radio signals from the Universe – see birrcastle.com

Cool Planet Experience in Enniskerry, Co Wicklow, also has a big picture in mind and has now opened its doors to the public at its exhibition space in Powerscourt Estate. Through workshops, short films and interactive games, you can learn about the science of climate change, figure out your own carbon footprint and see the steps you can take to make the planet a better place to live – see cpe.cool