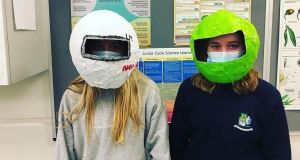 Earth to space station: students from Athlone Community College have been engaging in in fun-filled and educational events to cultivate an interest in space and space travel.

Twenty quick-fire questions from students at Athlone Community College delivered live to the International Space Station (ISS) on Monday provided a brilliant indication of mundane life aboard and a graphic indication of the state of planet Earth.

The students had just a few minutes to put their school on the astronomical map as they made contact directly with the ISS as it passed overhead at a speed of 27,600km/h .

The opportunity was made possible by the Amateur Radio on the International Space Station (Ariss) programme. And US astronaut Shannon Walker on board responded equally quickly, acknowledging each of her interviewers by name.

So what you do when you have an itchy nose while dressed in your space suit? “There’s not a darn thing you can do about it.”

Is there indication of how climate change is affecting the planet? “The evidence is very clear” in the form of disappearing glaciers visible from space.

Best place on board? Where you can sit and observe Earth.

The most surprising thing? “How thin our atmosphere [around the planet] is.”

As for spare time, there isn’t much – bar a chance to call her husband just before going to bed, she explains. Daily exercise to counter muscle weakness involves using a treadmill, gym bike or movement equivalent to lifting weights.

The one thing Walker will miss when she returns to terra firma is “floating around everywhere we go”, while the hardest part of becoming a member of the ISS crew was learning the Russian language and how to walk in space.

A total of 300 questions were submitted by students at the more than 1,200-strong mixed secondary school. But the inquiries were distilled for brevity, confirmed Laura Donnellan, science teacher and co-ordinator of the event which was a year in planning.

“The whole school community were delighted by this once in a lifetime opportunity that both staff and students will not forget,” she said afterwards.

“It is a massive opportunity for the students to see the possibilities and opportunities life has to offer and for all of us to see just how far technology has come,” she added.

In the months building up to the live event, the school has been delivering engaging, fun-filled and educational events to prepare students and awaken a deeper interest in space and space travel, she said. “Students got inspired to ‘aim for the moon, even if you miss you will land among the stars’.”

To carry out this real-time Earth-to-space radio contact – which uses amateur radio equipment to beam a line-of-sight signal to the ISS – the school established a temporary amateur radio station. This included a tracking antenna and two-way system which allowed students to speak directly with Walker as she took a break from her duties and experiments on fibre optics.

The station was operated by Irish members of Ariss Europe with support from the local Shannon Basin Radio Club.

The school was a stand-out choice due to its inspirational science education methodologies that promote hands-on, inquiry-based, collaborative and student-centred learning, according to Ariss national co-ordinator Séamus McCague. Four Irish schools have participated in the programme over the past 20 years.

The ISS was tracked via satellite crossing central America and heading out into the Atlantic. He made initial contact; heightening the sense of drama initially when noting there was only a “weak but readable” signal. But it sooner became stronger.

Earlier, he explained, it was “not like tuning into Midlands 103” radio station. The team had to take into account “dopler shift” – the change in frequency of a wave in relation to an observer who is moving relative to the wave source.

Ariss is a global voluntary group that has created a programme for utilising radio equipment aboard the ISS as a channel for further educating schools across the world on the work of the international space programme, life aboard the space station and expeditions which astronauts are undertaking as well as appreciation of the importance of amateur radio in society.