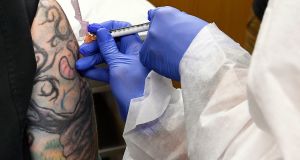 Ireland has a strong history of support for vaccination, whether it has been voluntary or compulsory. Photograph: AP/Hans Pennink

Never before have so many people looked forward to being jabbed with a sharp object. Hopes for the return of social life are now pinned to small phials of Covid-19 spike proteins and the syringes that may deliver us. While roll-out will take some time, and we need to continue with the same public-health measures, the announcement of the successful vaccines has given us all a bit of light at the end of the tunnel.

To stop the circulation of Covid-19, at least 50 per cent of the population will need to be vaccinated. Some people have already begun suggesting compulsory vaccination should be considered in order to accelerate the process. In both Ireland and the UK, this would be a significant reversal of vaccine policy.

The United States has compulsory vaccination: a parent must prove that their child has had certain vaccinations before entry into public school. Ireland has no compulsion but the provision of vaccination in schools and through the public health service is persuasive.

Vaccination rates have declined over the past decade but they remain well above 70 per cent for almost every vaccine offered and in many cases are more than 90 per cent. Nonetheless, recent outbreaks of mumps and measles have reminded us that reduction in our vigilance means an increase in disease.

Compulsory smallpox vaccination was introduced in 1853 in England and Wales and in 1863 in Ireland and Scotland. Smallpox was the only disease for which there was an available vaccine. The disease was not only life-threatening, it was also potentially disfiguring through the scars caused by healed “pox”. A particularly bad outbreak in the 1830s killed more than 40,000 people in England and Wales. Nonetheless, there was some debate about whether the state ought to be involved in providing vaccination.

Historian Deborah Brunton has written extensively on the vaccination project in Britain and Ireland. She argues the system of public vaccination established under the first Vaccination Act in 1840 was particularly important because it set up provision of free vaccination through doctors employed by the poor law medical system. This system enabled the roll-out of compulsory vaccination over a decade later.

The system was simple. Doctors were paid for successful vaccinations, supposedly checked by the local poor law board. In reality, regulation was light. This voluntary system reached rates of vaccination of more than 70 per cent of infants in some years. The greater the perceived threat from smallpox, the higher the rates of vaccination.

Brunton judges the 1840 act as a failure in Ireland. Implementation was difficult because the poor law system differed and matters were not helped by the lower fee offered to Irish doctors.

When compulsion was introduced in Ireland, by contrast, vaccination rates that were already high rose further still and deaths from smallpox dropped dramatically to fewer than 20 per year. A terrible outbreak in the 1870s caused thousands of deaths but the rate was far lower in Ireland than in England and Wales. One possible cause of the difference was the willingness in Ireland to vaccinate children and adults – and even to revaccinate people when an epidemic threatened.

As Ciarán Wallace has shown, compulsory vaccination continued almost uncontested in Ireland into the early 20th century with no emergence of the “conscientious objector” who troubled the vaccination system in England. Despite this, another outbreak of smallpox in 1902 and 1903 claimed a significant number of lives in Dublin and required a huge response including renewed vaccinations, isolation hospitals and the incineration of belongings. There was a high rate of compliance with all of these invasive measures.

Can we take any lessons from smallpox vaccination? I think one is that even without compulsion, Irish people will take a vaccine if they perceive a benefit from it. Another is that Ireland has a strong history of support for vaccination, whether it has been voluntary or compulsory. I think we can expect high levels of public support for a Covid-19 vaccine. – @AdelmanJulianaDr Juliana Adelman is assistant professor of history at Dublin City University