The challenging art of pollen forecasting 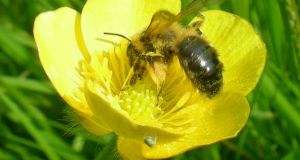 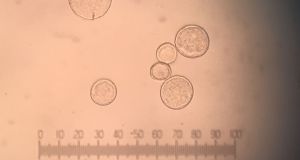 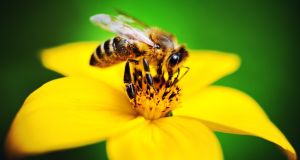 More than 20,000 bee species have evolved over time to depend on the the pollen and nectar resources of flowers

Pollen is one of the main causes of allergic rhinitis, known commonly as hay fever, an allergy that is estimated to affect between 10 and 30 per cent of people across western societies. Now with the onset of global warming, the pollen season is expected to lengthen, and the forecasting of pollen levels is becoming an increasingly important, yet tricky, task.

“Most plants produce hundreds to thousands of pollen grains, depending on how they are pollinated,” says Dr Dara Stanley, a lecturer in plant ecology at the Botany and Plant Science Department and Ryan Institute, NUI Galway. “Some plants, including willow, hazel and grasses, rely on wind to transport their pollen from one flower to another, and produce huge numbers of pollen grains because many will not reach their desired destination.”

“The majority of the flowering plants (87.5 per cent), on the other hand, use pollinators – such as bees – instead of wind to transport their pollen.”

Another complicating factor with forecasting pollen levels is that different people will have allergies to different types of pollen.

“The majority of allergies are to grass pollen,” says Stanley, “but tree pollen affects about 25 per cent of sufferers, and pollen from other plant species can also have an effect.”

In recent years pollen forecasts have become more widespread and have proved useful in providing information to the public about when they should prepare themselves. By taking the necessary precautions, the quality of life for sufferers can then be improved.

According to meteorologist Gerald Fleming, head of the general forecasting Division at Met Éireann, “the primary use of the pollen forecast is to enable those who suffer from pollen-related difficulties to take steps to protect themselves from the consequences of high pollen levels. These steps might include medication, avoiding locations where pollen is likely to be high, or in extreme cases, remaining indoors.”

At Met Éireann, forecasters team up with the UK’s National Pollen and Aerobiology Research Group, based at the University of Worcester, who provide the forecasts for Ireland during the pollen season.

Fleming explains that “producing a pollen forecast requires knowledge of the upcoming weather as well as botanical aspects, such as the flowering stage of the various grasses and trees that produce pollen.”

“Tree pollen is produced early in the growing season, roughly from March to May, with grass pollen prevalent from May to July,” adds Stanley. “Pollen from other plants – sometimes referred to as “weeds” – is more prevalent later in the summer.”

These botanical details are key when trying to make an accurate prediction, but according to Fleming, one significant difficulty with regards to pollen forecasts in Ireland is the lack of routine observation and measurements of pollen levels across the nation.

“This makes it difficult to validate the models under Irish conditions, and to provide meaningful verification of the forecasts,” he says.

Pollen levels in a changing climate

In response to our changing climate, annual pollen levels are suggested to increase in the future, and given the health impact and pharmaceutical interest, pollen forecasting is likely to become a topic of increasing merit.

“Climate change can alter the phenology of plants, or the timings of when stages of a plant’s life-cycle happens,” says Stanley. “Increases in temperature often result in plants growing earlier in the season.”

She gives an example that work carried out at Trinity College Dublin has shown that the start of the plant-growing season for some species in Ireland has become one week earlier for every increase of one degree in temperature since 1970. This means that climate change may cause pollen production to happen earlier in the year, effectively lengthening the hay-fever season; a phenomenon which naturally calls for more accurate forecasts.

“There is significant research under way in Ireland, actively supported by the EPA, into methods for providing improved measurement of pollen counts,” says Fleming. “In addition, the weather models, which provide the forecasts of how pollen diffuses through the atmosphere, are constantly improving. “

These developments encourage a viewpoint that pollen forecasting in Ireland will improve over the coming years. In that regard, Fleming is optimistic. He says that “forecast accuracy should improve in terms of which types of pollens are prevalent, what the levels at any given location are, and how these are likely to change over time.”

Conor Purcell is a Science & Nature Writer with a PhD in Earth Science. He can be found on twitter @ConorPPurcell and some of his other articles at cppurcell.tumblr.com.

The evolution of pollen

Since the dawn of life on Earth almost all species of plants and animals have co-evolved together in their shared ecosystems, with each behaviour or set of behavioural traits affecting the evolution of the other.

The pollination process in plants is no different, and acts as a nice example of how species co-evolve though the process of natural selection.

NUI Galway’s Dr Dara Stanley explains that “pollinators are animals such as bees, birds, or mammals, who visit flowers to feed on nectar and pollen, and at the same time pick up pollen grains on their bodies and transport them from flower to flower.”

This co-dependent relationship exists because flowers provide a life source for their visitors, and these in turn facilitate the reproduction process of the host plants themselves. In fact, researchers can look at fossils to further investigate the history of this evolutionary process.

For example, more than 20,000 bee species have evolved over time to depend on the the pollen and nectar resources of flowers. The fossil record suggests that bees might have evolved during the Cretaceous period, about 140-110 million years ago. This timing is consistent with the appearance of the first flowering plants (angiosperms), demonstrating that they co-evolved around the same time.