Poolbeg plumes are nothing to get steamed up about 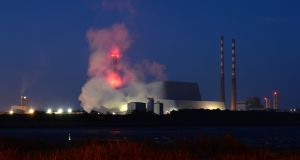 Plumes coming from the new incinerator at Poolbeg. “No waste has been burned, no smoke emitted,” said a spokesman for US operator Covanta. Photograph: Dara Mac Dónaill

It may look like a scene from a disaster movie, but the billowing plumes seen coming from the Poolbeg incinerator site over recent days are nothing more than steam.

It is all part of the commissioning process during which fuel oil is used to fire up the boilers and blow steam through the pipes to clean them, said a spokesman for US operator Covanta. These “steam blows” are then vented harmlessly into the open air through temporary pipework.

“No waste has been burned, no smoke emitted, no ash emitted and no smells,” he said.

The steam blows are now finished.

There have been claims of smoke and ash over Dublin but the blame does not lie with Covanta, it arises from the Howth Head gorse fire, he said.

Small quantities of waste may be reaching the plant but are being used to test a weighbridge and cranes, the company’s website said. Covanta has promised to send out a notice before the “first fire of waste” begins.

The incinerator is expected to go into full service before the end of the summer.