Robots part of a gold rush under the sea 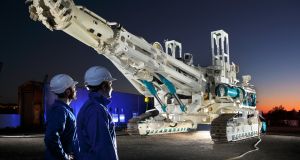 Nautilus’s deep-sea mining robot. There are plans to deploy it to extract deposits rich in copper, gold and silver at a depth of 1,600m off Papua New Guinea

A world’s first is planned in the Bismarck Sea in the southwest Pacific. A Canadian company, Nautilus Minerals, is to deploy underwater robots to extract deposits rich in copper, gold and silver at a depth of 1,600m off Papua New Guinea.

Millions of tons of minerals are there to be scooped up. Some predict this will herald a mining boom of crucial metals for technology in smartphones, batteries and electric cars from the sea’s depths.

The metals come from underwater pipes close to undersea volcanoes. Mining these spectacular “black smokers” – resembling miniature industrial chimneys – is not without controversy. They are home to an unusual collection of microbes and animals, and are rich in metals such as iron, copper, zinc, silver and gold. Vents are also found in volcanic regions in other parts of the world.

Geologist Prof Andy Wheeler at University College Cork led an expedition to such “black smokers” off the Azores in 2011. These too are likely to be rich in metals, but lie at a depth of 3,000m. Mining at this depth is unattractive right now from an economic standpoint.

“What Nautilus Minerals are looking at off New Guinea is very similar to what we see on the mid-Atlantic Ridge, ” says Dr Sean McClenaghan, economic geologist at Trinity College Dublin.

“There are potentially minable deposits on the mid-Atlantic ridge,” agrees Steve Scott, emeritus professor of earth science at the University of Toronto, Canada. “There is active exploration by the Russians, French, Norwegians and Brits.” He has consulted for Nautilus, and believes the sea holds a bounty of mines for the future.

The metal sulphides form because sea water seeps into volcanically active rock beneath the sea bed. The sea water heats up and then strips metals from the rocks, before bursting out like a geyser. The metal-laden fluid is a blistering 400 degrees but is cooled to near zero instantly, causing the metals to drop out.

Also found in the deep are lumps of metal oxides which cover vast areas of the Pacific; each golf-ball sized lump is made of mainly manganese, precipitated from sea water, but also with iron, nickel and more valuable exotics like vanadium and cobalt. Nautilus Minerals is targeting such “polymetallic nodules” in the central Pacific.

There may also be opportunities in the Atlantic. Two years ago a German research vessel discovered the largest field of nodules yet in the Atlantic while trawling hundreds of miles off Barbados. But, just like the Pacific metals, they lie at murky depths of about four and five kilometres.

“There are major obstacles in recovering these metals. First of all, how do we get them up, and then how do you process them,” says Dr Balz Kamber, geologist at Trinity College Dublin. “And they are in international waters. So who do they belong to?”

A third possible treasure trove is iron-manganese crusts rich in cobalt; these metals have precipitated out of the sea water and accreted on to bare rock two to three kilometres down. “It’s a bigger technical challenge to mine these,” says Wheeler. It requires scraping a few centimetres of metals off bare rock.

EU-funded projects are studying the potential of metals in the Atlantic.

“In Europe it is early days. We are trying to find out what’s there,” says Prof Wheeler. Ireland should pay attention. “It’s something Ireland should be interested in, and there may be opportunities to get involved. A whole load of service companies would be needed to support vessels, survey and prospect.”

What is mined and when will come down to metal price and costs, says Wheeler. “Economics will determine whether this goes ahead,” says McClenaghan.

The Nautilus project is scheduled to start in early 2019.

A plan to suck up metals from the sea floor around hydrothermal vents off Papua New Guinea has been criticised by some environmental groups.

A rich community of bacteria feed off chemicals there spewing out from the sea floor, such as methane and hydrogen-sulphide. The chemicals support unique species of clams, tube worms, shrimp, and crabs. They rely on these chemicals, rather than photosynthesis, to power their community. Environmental campaigners argue that this ecosystem should not be destroyed.

“If carried out responsibly [the mining] should not cause the regional extinction of deep-sea vent communities,” says Collins. “Similar, even more biodiverse sites exist close by, which can act as a larval reservoir for recovery of the mine site. However, there is still a lot to find out about these communities, and a precautionary approach should always be advocated.”

It could be possible to sustainably harvest metals from the vents, says Prof Andy Wheeler at University College Cork. “These are tough environments and the organisms are adapted to toxic chemicals and disturbances.”

Vents in the mid-Atlantic ridge would not be so resilient, and could be important islands for such life in the Atlantic, warns Collins.