How childhood trauma can make you sick years later 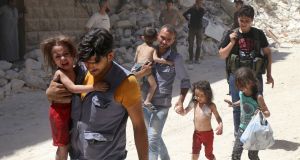 The conflict in Syria has left a nightmarish legacy. Maimed children, ruined cities and crammed refugee camps are glaring consequences, but war has an impact on an incredibly small scale, too: inside the brains and inside the cells and DNA of children who have suffered.

Maltreatment, whether through war or child abuse, can transform how a person responds to adversity later, and leave them at higher risk to physical illness, although not everyone reacts the same way. Scientists are trying to figure out the complex biology that connects childhood trauma with ill effects.

The stress response itself is a basic mechanism that primes us to react to danger. Confronted with a stressful situation, three glands (hypothalamus, pituitary and adrenal) sound the alarm, causing the stress hormone cortisol to spike after about 20 minutes.

“[Cortisol] is a particularly helpful compound if you are dealing with a stressful challenge because it can increase blood-sugar levels and gives you energy you need,” says Dr Kieran O’Donnell, an Irish scientist at McGill University in Canada, who is investigating how childhood abuse impacts DNA. Cortisol dampens down some bodily functions, allowing us to focus on the immediate threat.

Too much stress in early life can reconfigure the system. One important change seems to be to the receptor proteins that cortisol uses to communicate with our cells. Stimulation by cortisol can cause chemical groups (methyls) to attach to and change the shape of DNA, which in turn influences the work of genes, including for the hormone receptor.

These effects are termed “epigenetic”. “This allows the DNA to be more flexible and to respond to the environment,” O’Donnell says. It does not change the DNA code but changes what it does. Early-life maltreatment may trigger such changes and in this way disrupt how the stress receptor works and influence behavior. “When faced with acute stress, such as a mock job interview, adults with a history of maltreatment tend to produce less cortisol,” says Danese.

Landmark studies on rodent motherly care at McGill University suggest it all harks back to the basics of how mammals respond to stress. Rat pups that got very little grooming from their mums were discovered to have fewer receptors for rodent stress hormone compared with pups given lots of motherly attention. The result: pups with inattentive mums are slow to turn off their stress response (receptors are components in the off switch).

An ungroomed rat is also a hyper-vigilant rat, useful if you live in an alley full of cats

Such an ungroomed rat is also a hyper-vigilant rat, useful if you live in an alley full of cats. Attentive mums give offspring a more chilled disposition. The conclusion is that grooming prepares young rodents for their future environment. Rats and children are far apart, especially in terms of brain development. Still, there are lessons to be learned, say scientists, since the stress response is so basic.

There is some supporting evidence. “Individuals with a history of maltreatment tend to be hypersensitive to threats in the environment and to respond less to rewards,” says Danese. Findings have translated somewhat at a molecular level, too. “We see the same sort of changes in DNA methylation of the stress-hormone receptor in individuals of child maltreatment as we see in the offspring of low-grooming [rat mums],” says O’Donnell. “We have begun to realise that social environment can influence chemical modifications of DNA, which allows for changes in gene expression. ”

Those who experienced stressful early years may be somewhat conditioned for difficult circumstances later in life; unfortunately, evolution sculpted us more for challenges our ancestors faced, such as food shortages or attacks by a foe or predator, not long office hours and looming deadlines.

And traits of benefit to our ancestors living a difficult childhood may not be so useful in modern society. Danese gives obesity, linked to childhood adversity, as an example: “Storing as much energy as possible is a good thing if you face an unpredictable environment and you do not know when you can eat next. Today we live in a calorie-rich world, and a thrifty metabolism has become a problem.”

Not every child responds the same: life history, brain development and genetics matter. “Some children experience adversity but tend to be okay,” says O’Donnell. The Mayo native takes cheek swabs and blood samples to analyse DNA from adults who were abused as children. He is searching for tell-tale epigenetic patterns that could signpost which youngsters with a difficult early life are likely to be more vulnerable. They could then be targeted for extra assistance.

Understanding how this all works could open up therapeutic avenues, behavioral or pharmacological.

CHILDHOOD STRESS LINKED TO HEART DISEASE
Groups of children who are maltreated show signs in their blood of higher levels of inflammation. Andrea Danese, a child psychiatrist at King’s College London, hopes to figure out why this happens and how we can intervene to help those children who may suffer later in life.

The increased inflammation puts them at risk of illness and a life cut short. “It is associated with a range of physical health conditions, starting with obesity but also cardiovascular disease, respiratory problems and type 2 diabetes,” says Danese. He is investigating why childhood maltreatment has these effects and believes the answer may lie in the immune system. “[Stress hormones] are one of the most important anti-inflammatory compounds in the body. In those with a history of maltreatment, stress hormones may not work as effectively to dampen inflammation,” he says.

Heightened stress early in life is useful in the short term if children face adverse circumstances, such as abuse or threats, but can stamp a legacy effect on their body. Such children may make less stress hormones later in life but also hold wonky receptors for the hormone to latch on to and turn the stress response off. The consequences: fewer anti-inflammatory compounds and a compromised shut-off system to stress. One antidote to stress and inflammation is to exercise more, something that can be widely prescribed.