Scientists finally crack how best to throw paper into a bin 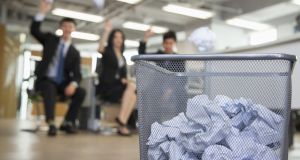 A slow underarm throw will yield the best returns for throwing paper into the bin, according to a new mathematical study. Photograph: iStock

A new study has revealed the optimal way to throw - from crumpled pieces of paper, to basketball free-throws.

Researchers at Yale University conducted a mathematical analysis of throwing, factoring speed, angle and release to establish the most successful techniques.

For the purposes of a basketball shot, and also in the case of a ball of paper, adopting a “granny style” underarm technique will achieve the best results.

Dr Madhusudhan Venkadesan, who led the work, said of the basketball technique: “Our mathematical analysis shows that if the thrower is capable of controlling the release angle and speed well, the underarm throw is slightly better for a basketball free throw.”

However, it remains to be seen whether science will prove more persuasive than professional advocates of the underarm style.

The retired NBA player Rick Barry, a pioneer of the underarm free throw, was one of the most effective shooters of all time and when he retired in 1980 his 90 per cent free throw record ranked first in NBA history. But he struggled to convince his teammates due to the inescapable fact that shooting underarm “makes you look like a sissy,” Barry said.

Watch our story to see what happens ...

Dr Venkadesan acknowledges that it is a difficult case to make.

“One suspects there are social and cultural reasons you don’t see that practised too often,” he said. “So what if some call it the ‘granny throw’? What matters is that the ball goes through the hoop! Rick Barry’s record does support the underarm throw.”

The study, published in the journal Royal Society Open Science, considered the chances of the ball being on target, depending on the style, speed and accuracy of a throw.

Adopting the unorthodox strategy could result in marginal gains for professional players, the research suggests. And, as sporting doctrine goes, marginal gains can lead to remarkable results.

It found that if the player is capable of controlling the release angle and speed well, the underarm throw has slightly better odds of going in. But for amateurs who have only crude control, the release of the ball overarm is safer, sparing casual players the dilemma of choosing style or results.

Similarly, the the study’s calculations would suggest the best strategy for getting a piece of crumpled up paper into a bin is a slow underarm throw.

“What we find is that almost the slowest arc is often the most accurate,” Dr Venkadesan told the BBC.

“We’ve compared these calculations to published data of people throwing into wastebaskets; we’ve compared it to a study in dart throwing.”

By contrast, in the case of darts, the researchers say the more common overhand throw is the best. Specifically, the best throwers will release the dart when the forearm reaches 17-37 degrees, before it becomes vertical, and at a speed of 5.1-5.5 metres per second.