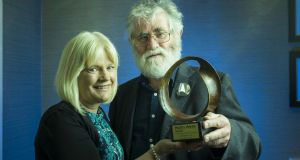 Irish mathematician, research meteorologist, academic and Irish Times columnist, Dr Peter Lynch has been honoured as this year’s recipient of the Maths Week Ireland Award for his contribution to raising public awareness of maths, pictured receiving his award from Sheila Donegan of Maths Week Ireland.

Mathematician, meteorologist and Irish Times columnist, Dr Peter Lynch, has been honoured as this year’s recipient of the Maths Week Ireland award for raising public awareness of maths.

The award is presented annually during Maths Week, the all-island event run by Science Foundation Ireland; the Department of Education and Skills, universities, institutes of technology, libraries, schools, training colleges and employers.

Lynch is an applied mathematician who has had a 30-year career as a research meteorologist at Met Éireann and a second career as an academic at UCD. It’s in his “third career”, as a notable blogger; Irish Times columnist and popular maths book author, that “he has brought both the beauty and application of mathematics to a wide general audience in Ireland and beyond”.

From Dún Laoghaire, Co Dublin, he earned degrees in mathematical science at UCD before joining the Irish meteorological service (now Met Éireann). Along the way be completed his doctorate on “planetary-scale hydrodynamic instability in the atmosphere” awarded in 1982 by Trinity College Dublin.

In 2004 he joined UCD where he taught specialised courses and mentored numerous postgraduate students. He also started publishing books including The Emergence of Numerical Weather Prediction: Richardson’s Dream. On formally retiring in 2011, he started writing a weekly mathematical blog called “That’s Maths”, which has been listed as one of the Top 100 Math Blogs for Students and Mathematics Teachers, some of its columns appear fortnightly in The Irish Times science page.

A review of his most recent book, That’s Maths, in the Bulletin of the Irish Mathematical Society notes, “The level of mathematics expected of his readers varies from the purposely equation-free musings of The Irish Times articles, to the more sophisticated pieces published only in his blog.”

The citation at an award ceremony this week was read by Prof Colm Mulcahy of Spelman College, Atlanta. Maths Week Ireland co-founder Eoin Gill commended Dr Lynch for “his breadth of interests; tireless energy, eye for a good story and the key qualities with which he imbues his writing: beauty, utility, elegance and surprise”.