Students from Tallaght Community School in Co Dublin are the first in Ireland to make direct radio contact with the International Space Station (ISS). 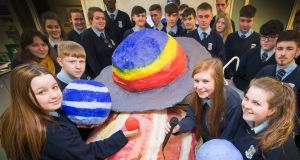 When students from one Dublin school make radio contact with the International Space Station orbiting Earth today, they will have just between six and 12 minutes to put Ireland on the astronomical map.

Students from Tallaght Community School in Co Dublin will be the first in Ireland to make direct radio contact with the International Space Station (ISS) while it is in orbit around our planet.

“Oscar Romeo Four India Sierra Sierra (OR4ISS) – do you copy?” will open the conversation from Earth at 1.48pm as the ISS comes directly over Ireland.

The window of opportunity is tight as the spacecraft will be whizzing by at 27,600km/h, giving the students a timeframe of between six and 12 minutes.

To carry out this Earth-to-space radio contact, courtesy of the Amateur Radio on the International Space Station (Ariss) programme, the school has set up a temporary station on its grounds. It includes an antenna and a two-way radio system, which will allow students to speak directly with lead astronaut Paulo Nespoli while he takes a break from his duties and experiments on board the ISS.

Transition year student Levie Kolosvosi will ask the crew about space walks and how ISS research benefits the world. He said he was “very excited and so are the teachers”, especially as the project was two years in planning.

Fellow student Dean Gooding will quiz the ISS team on the structure of the space station and, if he gets a chance to slip in a second question, will ask if it is ever affected by solar radiation surges.

The ISS is “a really wonderful indication of what humans can achieve”, he told The Irish Times. Given what Ireland is doing in the world of astronomy, there was no reason why an Irish astronaut should not be part of a future mission.

Fourth year student Megan Kelly will be in the audience and relishing the experience. Astronomy is more than a hobby for her, so much so she would consider going into space. “The school are already preparing me for it!” she added.

Her class-mate Chloe McSweeney said it was going to be a once-in-a-lifetime happening. “It will be great to be there in the moment. Tallaght CS is honoured to be the first school in Ireland to talk directly to the ISS, and is setting an example for other schools.”

Maths, physics and science teacher Ian Boran directs the school’s participation in Ariss. Participation requires a broad educational plan that goes beyond teaching space and astronomy and stretches over many teaching departments, he said. The programme features, for example, in arts, music and even home economics with students considering astronauts’ nutritional needs.

He added: “It’s a great opportunity for students to see how far technology has come in the past 20 years. It exposes them to different career paths, and with direct contact with the ISS it will provide a memorable experience.”

Ariss is run by a global voluntary group which uses audio equipment on board the space station as a channel for further educating schools across the world. Its radio technical co-ordinator Daniel Cussen is working with the students and staff, and will be on-hand to ensure their temporary mission control radio station is up and functioning. “I am thrilled for Tallaght CS,” he said, “I have worked with many schools in Europe to facilitate contact with the ISS, but as an Irishman I am delighted to be working with Irish students as they leave their mark in history as the first to make direct space contact.”

Ariss national co-ordinator Séamus McCague said the programme provided a great opportunity for students to learn about science, technology and radio. “Tallaght Community School were a stand out choice due to their ‘Inspiring Science Education’ initiative which promotes hands on, inquiry-based and collaborative learning. It provides the tools to make science education more challenging, playful and above all more imaginative and inspiring for today’s students.”

Mr McCague paid to tribute to the students and staff of Tallaght CS for their enthusiasm and commitment to the project.

Later this year Glanmire Community College in Co Cork will become the second Irish school to touch base with the ISS as it passes directly overhead.

A live stream of the Tallaght CS hook-up with the ISS will be available at https://www.youtube.com/user/togdublin/live, beginning 90 minutes before the live contact.