Tracking Ophelia: Where did it come from? Why did it whip up?

Climate change didn’t cause the storm, but may have helped it travel further north 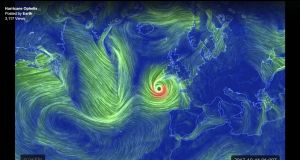 A visualisation of the path of Storm Ophelia as it was expected to hit Ireland, from the Earthwindmap website

Just over a week ago, near Cape Verde in the Atlantic Ocean, there was a significant wave moving east. The essential ingredient for a potential hurricane was also present:sea temperatures above 26 degrees. Warm atmospheric air played its part too in creating a tropical storm.

By Wednesday October 11th, Ophelia was named, and the Natural Hurricane Center (NHC) in Miami, Florida was tracking it. It was graded Category 3 on its 1 to 5 hurricane scale and rapidly developed from that point.

Typically, tropical storms move westwards towards America and then develop into hurricanes. Some of them just fizzle out. Predicting hurricane paths is always difficult, but they usually die out over land, or extinguish themselves when they meet cold waters in an area stretching offshore from south of Newfoundland to New York.

The autumn storm season in Ireland is often enhanced by the remnants of hurricanes coming across the Atlantic, having transformed themselves into deep mid-latitude depressions as they encounter those colder waters of the north Atlantic.

Only 15 hurricanes have passed within 200 nautical miles of the Azores since scientific monitoring began in 1851. In this instance, Ophelia took a turn and immediately attracted the attention of Met Éireann – it was heading directly for Ireland.

“This one is very unusual . . . it has taken a direct tack northwards,” noted Met Éireann forecaster Evelyn Cusack.

By Saturday, it was classified as “the most powerful hurricane this far east of the United States on record”. By Sunday, it was predicted to be “the worst storm to hit Ireland in 50 years”.

Climatologist Prof Pier Luigi Vidale of the University of Reading noted its very unusual aspects: “Records show the last time one of this severity – beyond Category 2 – came this close to the UK was in 1966, with Hurricane Faith. We also had Debbie in 1961, but its nature as it arrived in Ireland is unknown. They also show that we have not had such a strong storm this far north and this late in the season since 1939. The overall North Atlantic hurricane season is exceptional, for the like of which we must go as far back as 1893.”

This is the 10th consecutive tropical storm that has turned into a hurricane this year. It is unprecedented but cannot be blamed on global warming. Evidence of the greater intensity of hurricanes, on the other hand, may be due to warming sea waters caused by human-induced global warming.

It is difficult to know whether climate change contributed to Ophelia. There is some early research which suggests warmer sea temperatures associated with climate change might allow Atlantic hurricanes to travel further towards Europe before becoming severe extratropical storms, according to Prof Len Shaffrey of the National Centre for Atmospheric Science in the UK. “However, these results are very recent and more research needs to be done to determine whether this is likely to be an impact of climate change.”

What was also unusual about Ophelia is that it kept its hurricane-strength winds and structure right up until it transitioned into an extratropical storm just before it hit Ireland.