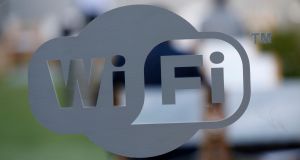 More than one in three Irish people believe they could not live without WiFi, with nearly 50 per cent of 19 to 24-year-olds saying they depend on it, according to a survey on attitudes to science. Photograph: Bloomberg.

More than one in three Irish people believe they could not live without WiFi, with nearly 50 per cent of 19 to 24-year-olds saying they depend on it, according to a survey on attitudes to science.

Mobile phones come a close second at 28 per cent, with one in three people aged between 25-39 years old proving most attached to their devices.

The growing dominance of technology in the lives of Irish people, including dependence on digital services, is strongly indicated by the survey, which finds that one in four people believe they could not live without online banking, storage or shopping apps – the highest proportion of which are aged 40 and over.

The survey findings were released on Tuesday, coinciding with the announcement of details of the 2020 BT Young Scientist & Technology Exhibition (BTYSTE) at Dublin’s RDS from January 8th to 11th. The Primary Science Fair, a showcase of science undertaken by younger students also takes place during the exhibition.

To mark its 20th year as organiser and lead sponsor, BT Ireland surveyed 1,200 people ranging in age from 12 to 55 on generational perceptions of science and technology.

In contrast, 25 to 59-year-olds choose more functional advancements, with over one in three saying they would like to see greater use of AI in transport over the next 20 years.

The survey found people aged 12 to 24 were most interested in science and technology (63 per cent), while two in three of this cohort also consider themselves digital natives; “very well informed” on the latest scientific discoveries and technological developments, compared to 28 per cent of total respondents.

“It is encouraging to see so many young people develop an interest in the big issues affecting our lives today and into the future.”

The focus on science, technology, engineering and maths (STEM) through participation in the contest and the Primary Science Fair “provides an unbeatable bedrock for their studies and career paths,” he added.

BT Ireland managing director Shay Walsh encouraged every school to get students involved. “What they create today will shape the world we live in tomorrow, and that’s a very exciting prospect.”