The rise and rise of women in maths

Once a field dominated by men, brilliant women mathematicians are finally getting the recognition they deserve 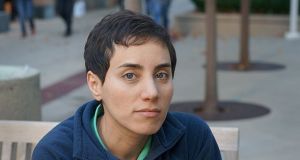 Maryam Mirzakhani was awarded a Fields Medal for her mathematical research. She died from breast cancer at the age of 40 in 2017.

The influential collection of biographical essays by Eric Temple Bell, Men of Mathematics, was published in 1937. It covered the lives of about 40 mathematicians, from ancient times to the beginning of the 20th century. The book inspired many boys to become mathematicians. However, it seems unlikely it inspired many girls: the only woman to get more than a passing mention was Sofia Kovalevskaya, a brilliant Russian mathematician and the first woman to obtain a doctorate in mathematics.

A more recent collection of biographies, Remarkable Mathematicians: From Euler to von Neumann, by Ioan James, published in 2003, did slightly better: in addition to Kovalevskaya, it described the life and work of Sophie Germain, an outstanding French mathematician, and Emmy Noether, who has been called “the mother of modern algebra”.

In an obituary in the New York Times, Albert Einstein wrote: “Fräulein Noether was the most significant creative mathematical genius thus far produced since the higher education of women began”. Still, only three of the 60 mathematicians profiled in James’s book were women.

In 2014, Maryam Mirzakhani was awarded a Fields Medal for her mathematical research. This award is regarded as equivalent to a Nobel Prize. Mirzakhani was the first woman to win the award in its 80-year history. Born in Tehran on May 12th, 1977, she was the first girl to compete for Iran in the International Mathematical Olympiad, and she won gold medals in Hong Kong in 1994 and in Toronto in 1995, gaining a perfect score each time. This was a remarkable achievement. Mirzakhani specialised in the geometry and dynamics of complex curved surfaces. She was a professor at Stanford University from 2008 until her death in 2017 from breast cancer at the age of just 40.

In 1990, Karen Uhlenbeck presented a plenary lecture at the International Congress of Mathematicians – the ICM – the largest and most important gathering of mathematicians in the world. Uhlenbeck was only the second woman to give a plenary lecture, the first being Emmy Noether in 1932. This indicates how difficult it has been for women to reach the pinnacle in a male-dominated field.

The Abel Prize, named in commemoration of the outstanding Norwegian mathematician Niels Henrik Abel, is a prestigious international prize, awarded annually for work in mathematics.

In March this year, it was announced that the winner of this year’s prize is to be Karen Uhlenbeck, for her pioneering work in geometry, analysis and mathematical physics. She is the first woman in the 16-year history of the prize to receive it. On May 21st, King Harald V will present the prize to Uhlenbeck at a ceremony in Oslo.

At the World Meeting for Women in Mathematics in Rio de Janeiro last year, Mirzakhani’s birth date – May 12th – was chosen for the celebration of women in mathematics. The aim is to inspire women to follow careers in maths and to encourage an open and inclusive environment for all. Many events are taking place throughout the world during May as part of the celebrations.

The May 2019 celebration is expected to be the first of many. Among other events, a half-day event is planned at UCD for May 29th, including a talk by Brendan Guilfoyle on the works of Karen Uhlenbeck. Let us hope these events raise awareness and increase understanding of the difficulties in achieving a balance in mathematics. We need people with the best brains to work in the field; it is immaterial whether they are men or women.

Peter Lynch is emeritus professor at the UCD School of Mathematics & Statistics – he blogs atthatsmaths.com