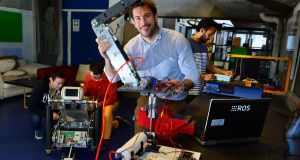 Conor McGinn, professor of robotics at Trinity College Dublin, is working to develop robots to help the elderly and disabled, people with dementia and Alzheimer’s and those along the autism spectrum .Photograph: Dara Mac Dónaill

Never mind robots taking our jobs – they’re already taking the place of our friends and family.

Dawn breaks over a Japanese suburb. A young man stirs in his bed. “It’s morning – wake uuuup!” coos a girlish voice. The young man sits up and smiles down sleepily at his companion. She giggles coquettishly: “Good morning!”

They could be just another young couple, except for one difference – she’s a one-foot-tall hologram, inside what looks like a coffee-maker on the man’s bedside locker. She’s a “virtual waifu” – basically an anime character who is a substitute wife.

She can tell her “master” what the weather will be like outside and text him reminders at work so he doesn’t miss any meetings. When he’s on his way home, she can switch on the heating and lights, and put on nice music. But most of all, she provides this busy, career-oriented young man with the thing he needs most: companionship.

She’s always there for him, and always happy to see him. In the rather creepy promo video, she dances with joy when the young man arrives home. When this man meets a real woman, he’s going to have some seriously unrealistic expectations.

Doomsayers have been predicting for years that robots will take over our jobs. Humans Need Not Apply, the robotics exhibition currently at the Science Gallery, looks at this future HR headache. But there’s a more immediate threat looming over the horizon: that robots may soon replace our friends and family and become our closest companions.

Kirobo, a cute little robot that sits on your palm, has become popular with childless couples in Japan. Buddy is a “family robot” on wheels with an expressive cartoon face that can entertain your kids, keep you connected and even patrol your house while you’re out. And Romeo is a 1.4-metre assistive robot that can open doors, climb stairs and pick things up from the table – the kind of tasks elderly or disabled people might find challenging.

In films such as Ex Machina and TV series such as Westworld, robot-human interactions invariably end in disaster. But in the real world, a new breed of assistive, social robots may provide the solution for a more imminent disaster – the collapse of our healthcare services.

Conor McGinn, professor of robotics at Trinity College Dublin, is working to develop robots to help the elderly and disabled, people with dementia and Alzheimer’s and those along the autism spectrum. He doesn’t see so-called social robots as “creepy”, but he does believe that when developing these assistive technologies, engineers need to look at the human factor – ie, will people be comfortable interacting with these machines?

“I’ve been fascinated by this social intelligence question, how people engage with each other. When we see a face or interact with someone, what’s actually happening?” says Prof McGinn. “When we’re trying to create social robots that people are happy to engage with, and we start asking these psychology-based questions, it sends you into a rabbit hole.”

Prof McGinn’s rabbit hole is a basement in Westland Row, where he and his team are developing assistive robots that can perform complex mechanical functions and even more complex social interactions. A trip to Japan gave McGinn a huge insight into how Japanese society has embraced the culture of robotics.

Disengage from the world

But in a society where people are becoming more isolated, is there not a danger that people can form greater attachments to their robots than to their family and friends, and disengage from the world around them?

“If you go into a restaurant and look at the amount of people who are on their phones texting, this is already happening,” says McGinn.

“Using technology for companionship is nothing new. For elderly people who live by themselves, the television or the radio for them has traditionally been their companion. Take a phone off a teenage girl, and see how she reacts. And look at the way some men talk about their cars.”

For a machine to elicit an emotional response, says McGinn, it has to have value. McGinn acknowledges there are many ethical questions about robotics that need to be asked, but there are also pressing social needs that robotics can address right away.

“We’re just at the beginning of understanding how we interact with these things, but it’s something that we’re going to have to concern ourselves with pretty fast, because the need for these robots is so great. I’m blue in the face trying to get visibility with decision-makers on this, because we have a healthcare system that’s falling apart.”

There may come a day when robots will look and act just like us, but before that day comes, scientists have a lot of ethical questions to deal with, says Conor McGinn, professor of robotics at Trinity College Dublin.

“The problem with building realistic, humanlike robots is that you’re tricking people. It’s an exercise in deception. If you could build a robot that could blend into society and people can’t tell if it’s a robot or a person – and we’re nowhere close to doing it – the security risk that would pose would be off the charts. The damage that could do, like suicide bombing.

“Technology has that duality: on one side it has the potential to do amazing good, and on the other side it has the same potential for harm, if not greater. And there is a responsibility on developers and academics to get off the fence and say this is what we should and shouldn’t be doing.

“The research me and my team undertake is acknowledging the fact that robots and humans are different physical entities. They’re not made from the same stuff. But if they’re going to perform the same tasks, there’s no point in a robot working in a house and not having it similarly shaped to a human, because how is it going to reach shelves?

“And if a robot is trying to interact efficiently with a human, it makes sense for it to have a face. If it just has lights, like R2-D2, it’s cute, but it’s hugely limited.

“The overwhelming consensus is that robots are a force for good. Robots will give us utility that we badly need, but they’ll also give us deep insights into who we are, what our brains are like, what we’re doing here.”