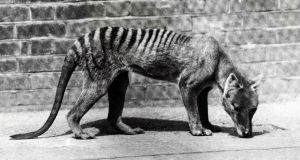 The Tasmanian tiger is thought to have died out some 80 years ago. Photograph: Paul Popper/Getty Images

“Plausible” possible sightings of a Tasmanian tiger in north Queensland have prompted scientists to undertake a search for the species thought to have died out more than 80 years ago.

The last thylacine is thought to have died in Hobart zoo in 1936, and it is widely believed to have become extinct on mainland Australia at least 2,000 years ago.

But sightings of large, dog-like animals that are neither dingos nor foxes have persisted over the decades, despite widespread scepticism.

Prof Bill Laurance said he had spoken at length to two people about animals they had seen in Cape York peninsula that could potentially be thylacines, and that they had given plausible and detailed descriptions.

One was a long-time employee of the Queensland National Parks Service and the other was a frequent camper in the north of the state.

Prof Laurance said all the potential sightings to date had been at night. “In one case four animals were observed at close range – about 20 feet away – with a spotlight.”

Descriptions of their eyes, size, shape and behaviour were inconsistent with known attributes of other large species in north Queensland such as dingoes, wild dogs or feral pigs.

The sightings were at two separate locations on Cape York peninsula, but the specifics were being kept confidential, said Laurance. “Everything is being handled with strict confidence.”

He said people who claimed to have seen a thylacine were “very nervous about relating their tales for fear of being branded kooks or fringe types”.

Richard Dawkins had tweeted hopefully of news of the study. “Can it be true? Has Thylacinus been seen alive? And in mainland Australia not Tasmania? I so want it to be true.”

Sandra Abell, a researcher with James Cook University’s Centre for Tropical Environmental and Sustainability Science who was leading the field survey, said they had been contacted with more possible sightings since their intentions were publicised.

She was in the process of deciding on sites for the more than 50 “camera traps” to be set up on Cape York peninsula, with the survey due to get under way when the dry season begins in April or May.

Ms Abell said even if a thylacine was not detected, the survey would inform the centre’s understanding of the status of rare and endangered mammal species on the peninsula.

Many mammals, including the northern bettong, were at risk from introduced predators, she said.

“It is a low possibility that we’ll find thylacines, but we’ll certainly get lots of data on the predators in the area and that will help our studies in general."

It was “not impossible” there were thylacines to be found, she said. “It’s not a mythical creature."

She said: “A lot of the descriptions people give, it’s not a glimpse in the car headlights. People who say they’ve actually seen them can describe them in great detail, so it’s hard to say they’ve seen anything else.

“I’m not ruling it out at all, but to actually get them on camera will be incredibly lucky.”

Thylacine truthers active on Facebook were emboldened by the recent rediscovery of the night parrot in Western Australia, presumed extinct, but photographed this month.

“Maybe old stripey next?” commented one member of the Thylacine Awareness Group.