A five-foot debris shield being installed on the International Space Station floated away during a spacewalk by two US astronauts, a temporary shield has been put in its place. Video: Reuters 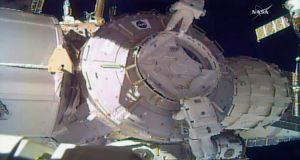 In this image made from video provided by Nasa, US astronauts Peggy Whitson, above, and Shane Kimbrough work on the outside of the International Space Station on Thursday. An important piece of micrometeorite shielding was lost during the spacewalk. Photograph: Nasa/AP

A five-foot (1.5-metre) debris shield being installed on the International Space Station floated away into space on Thursday during a spacewalk by two veteran US astronauts, a Nasa TV broadcast showed.

Peggy Whitson, who became the world’s most experienced female spacewalker during the outing, told ground control teams that a bag containing the debris shield floated away at about 10am (3pm Irish time).

At the time, Ms Whitson (57), and station commander Shane Kimbrough (49), were about midway through a planned 6.5-hour spacewalk to prepare a docking port for upcoming commercial space taxis and to tackle other maintenance tasks.

It was the eighth spacewalk for Ms Whitson, who surpassed the 50-hour, 40-minute record total cumulative spacewalk time by a female astronaut, previously held by Nasa astronaut Sunita Williams.

Cameras on the station tracked the debris shield bag as it sailed into the distance.

Nasa said engineers had determined it posed no safety threat to the astronauts or to the facility, a $100 billion research laboratory that flies about 250 miles (402km) above Earth.

No other details were immediately available about how the shield, which weighs 8kg, was lost.

“Teams are focused on completing the [spacewalk] and will review the events as they unfolded after it is completed,” Nasa spokesman Dan Huot wrote in an email.

Ms Whitson and Mr Kimbrough were working on a docking port that will eventually be used by space taxis being developed by Boeing and privately owned Space Exploration Technologies.

The pair installed three other debris shields during their spacewalk and fitted a temporary cover over the docking port where the lost shield would have gone.

While not a perfect fit, the cover will help protect the station from impacts and provide thermal shielding, Nasa said.

Spacewalkers occasionally lose small items like nuts and screws, but rarely do large objects slip away. The last such occasion was in 2008 when an astronaut lost hold of her tool bag while struggling with a jammed solar panel.

The lost debris shield will eventually be pulled back into Earth’s atmosphere and burn up. Until then, it joins more than 21,000 other pieces of orbiting trash and debris that are big enough to be tracked by radar and cameras on Earth.