Marching in solidarity for science 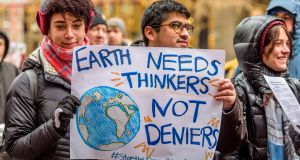 ‘We must not stand by as American scientists are silenced.’ Photograph: Erik McGregor/Getty Images

What do we want? Evidence-based thinking in policy development! When do we want it? Now!

That’s probably not the exact chant that will ring out from Dublin’s streets during the March for Science in Ireland in April, but it’s the basic motivation behind the march, according to one of its organisers, science communicator Dr Shaun O’Boyle.

The Irish march is one of several international events to support the March for Science in the US on the same day, which seeks to take a stand against a culture of “alternative facts”, he says. “The US march is a response to the way the current administration is playing so loosely with the facts, and the Irish march will be one of many international events in solidarity.”

The US march has sparked controversy by stating that it is a political march, but O’Boyle argues that science has a political dimension: “Science is done by people and its findings have an impact on people, so yes there is politics,” he says. “And we want to ensure that science is represented fairly in politics.”

The science marches around the world aptly coincide with Earth Day (April 22nd), according to O’Boyle, because the treatment of evidence about climate change and environmental impact are of serious concern.

“It is particularly worrying that one of the largest economies in the world has an administration that does not value scientific evidence and that has required major agencies such as the Environmental Protection Agency and the US Department of Agriculture to stop communicating their research and to take information down from their websites,” he says.

“We are lucky in Ireland, we have a country with a solid Environmental Protection Agency and funding bodies that value science communication and public engagement with science, and we want to support the solid work that happens in this country. But global problems such as climate change and tackling diseases require international action and we need to show as a scientific community how much we value the evidence.”

On the March for Science in Ireland website, several scientists have already outlined why they are marching. They include Prof Cliona O’Farrelly, a professor of comparative immunology at Trinity College Dublin, who describes how science has led to life-changing discoveries and how evidence-based knowledge and constructive debate strengthen policies and decisions.

“The scientific method underpins democracy,” she writes. “All this progress is being compromised by media spin, alternative facts and post-truth. People will die unnecessarily from measles and mumps, development of alternative power sources will be blocked, life on the planet will be threatened by global warming, the human species will be the only one to have generated its own preventable demise. We have to act now to push back the darkness that looms.”

March co-organiser and NUI Galway physicist Dr Jessamyn Fairfield writes: “Science is based on the free exchange of knowledge, provable facts, and new ways of thinking, for the betterment of humanity. If we truly believe in democracy of ideas, we must not stand by as American scientists are silenced. The Irish March for Science will show that regardless of our professions, we will fight for science, its values, and its contributions to society.”

March for Science Ireland starts at 2pm at Grand Canal Square on Saturday, April 22nd, and makes its way to Government Buildings on Merrion Street. sciencemarchie.wordpress.com