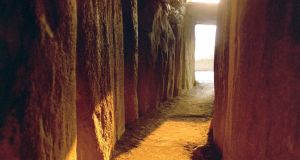 Sun coming up the passage at the Winter Solstice, Newgrange

Who built Newgrange and the other Boyne Valley passage tombs – and why? It remains one of archaeology’s most intractable questions. In a renewed effort to find some answers, archaeologists are using chemistry to analyse molecules in bone, pottery and artefacts found during early digs at Newgrange and Knowth.

Archaeology has steadily become a more scientific discipline over recent decades as it can offer new insights into the lives of ancient people. At the forefront of that is the field of molecular archaeology, where molecules from ancient samples are extracted and analysed using specialised instruments.

“The three main molecules that we are interested in are DNA, proteins and lipids,” explains professor of archaeology at the University of York, Oliver Craig, one of a new generation of archaeologists who has embraced science.

DNA can be extracted from human skeletal remains can determine a lot of information about a person’s ancestry, Craig explains. DNA can also tell you whether a person had moved to an area from somewhere else.

Lipids, or fats, can remain preserved in ancient pottery to indicate what they once contained. Isotopes in proteins from bone can give clues to ancient diets. There are clues in the teeth, as the chemistry of where a person grows up is locked in and preserved in teeth, and can be matched up with local geology.

These methods could definitely be fruitfully applied to Newgrange and the Boyne Valley Craig says, where there is very little traditional archaeological evidence of them remaining. Molecular archaeology, for example, helped in Britain to establish the people who built Stonehenge migrated from Wales.

Dr Jessica Smyth, an archaeologist at UCD, got her interest sparked in using the molecular approach to archaeology while doing post-doctoral studies in 2011 at the University of Bristol. She was studying neolithic pottery from Ireland and decided to run a chemical analysis for lipid residues, or fats, in the pots.

In a remarkable find, substantial residues of milk fats were found in the pots. This was the first proof that neolithic people in Ireland were dairy farming. “That was a bit of a lightbulb moment,” Smyth recalls. “Only through my work on neolithic pottery do we have direct evidence for dairying in prehistory.”

This relatively straightforward chemical test changed how archaeology viewed neolithic people in Ireland and beyond. The assumption had been that they were primitive and not sophisticated enough for dairy farming. It was thought that dairying only arrived in Ireland in the Bronze Age, from about 3300 BC.

The pot work by Smyth turned the way of thinking about neolithic people upside down. “They were incredibly sophisticated and we know that the first farming communities arriving in Ireland around 3800 BC are fully fledged dairy farmers – because we immediately find milk in the pots,” says Smyth.

Smyth has now turned her attention to applying molecular archaeology to discover more about the ephemeral neolithic builders who constructed Newgrange, and other passage tombs. Her approach is to use the artefacts, bones and pottery that were recovered from the early digs at Newgrange and Knowth during the 1960s and 1970s, and passage tombs in Wales and Orkney.

There is more pottery, and other excavated material, available from Knowth than Newgrange because the excavation of Knowth by former professor of archaeology at UCD, George Eogan, which began in 1962, was more extensive. But the builders of Knowth and Newgrange were the same neolithic people.

The molecular approach can pick up on evidence that has remained locked into these excavated materials, which were archived in the National Museum of Ireland and a few museums and repositories in Britain. The beauty of this approach is that it does not require new excavations of the passage tombs.

The analysis of strontium in the bones can tell you how mobile a person was during their life, and where they came from

There was a small amount of skeletal remains found at Newgrange, as well as fragments of animal bone, and pottery. There’s not a lot of material for Smyth to work with, but that’s not fatal. “Because the quantities you need are so small, the chances of that very small amount surviving are higher,” Smyth says.

The animal bones can be analysed in the same way as the human bones, and as there are more animal bones left, Smyth will be focused on that. One powerful method that she will be using is the analysis of strontium in the bones. This can tell you how mobile a person was during their life, and where they came from.

“The strontium you measure is your childhood strontium which is locked into the teeth and doesn’t change – like a time capsule,” Smyth explains. “There are isotopes that leave a trace in people from where they drank water.”

This was how archaeologists in Britain determined that skeletal remains from Stonehenge were those of people who had travelled over from the Preseli Hills in west Wales where the big standing stones for the monument were quarried.

It is possible that the skeletal remains from Newgrange could provide links between these neolithic builders and people alive in Ireland today. These links have been made at sites in Britain and became controversial, says Craig.

“People claim that they have been descended from these people, and therefore they shouldn’t be destroyed (by chemical analysis). That’s counterbalanced by the incredible new insights we are learning about these people,” Craig adds.

In terms of why Newgrange, and similar huge tombs, was built, one theory holds that the large scale building effort was done in response to huge stress, after a failure of farming and hunger. Smyth doesn’t buy into that. “I don’t think that a population on the edge of starvation is going to be doing that sort of thing.”

“We know these are amazing undertakings, but we don’t know what the sort of social set-up is,” Smyth says. “Are these really sophisticated farmers who are so good at what they do that they can afford to take time out to build these things, or to support specialists or craftspeople to do these things?”

“It’s about working what the subsistence strategies are underlying these huge achievements,” Smyth says. “Is there something that these people are doing in their lives to be able to generate that sort of activity?”

Smyth believes molecular archaeological approaches can provide some answers to her key questions: Did these societies build these monuments in response to stress or surplus? How did they feed themselves? What does their society look like? How far did they range in the landscape?

Smyth is also grateful for the work of Prof Michael O’Kelly of UCC and Eogan, who conducted the excavations of Newgrange and Knowth and made sure excavated materials from the sites were carefully curated and archived, so that archaeologists could return to study them in the future.

“It is only because of the careful curation and archiving of those materials that we can now look at them,” Smyth says. “From the 1960s onwards there was a curation policy in place that you don’t throw anything out because you don’t know when it will be useful. Pre-George Eogan’s time they used to chuck out the (animal) bones.”