No substitute for taste: how the clean meat industry is finding its flavours 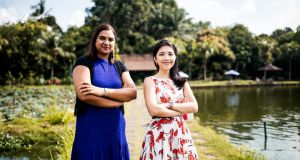 Like smartphones, our food could soon come in novel versions as plant- and cell-based producers compete for a share of our tastebuds.

While plant-based foods are just that, cell-based producers replicate livestock and fish cells to make what is also known as slaughter-free, cultured, fermented, clean or lab meat, dairy, poultry and fish.

Cell-based meat is produced by replicating animal cells in bioreactors similar to the tanks used for fermenting beer. “Clean meat” production facilities will look very much like breweries.

“We saw Impossible Foods just launched the Impossible Burger 2.0,’’ says Danish futurist and business adviser Lone Thier. “The same way iPhones were launched and improved after feedback from the market.’’ That, in turn, will challenge established players in the food industry, less accustomed to driving relentless innovation in the taste, texture and environmental impact of their products.

Before we get there, however, Thier says near-term commercial success depends on copycatting or improving the taste, texture and aroma of traditionally farmed meat, dairy and fish. In short, the transition has to be painless, “not a deprivation”, she says.

Although the reality of cell-based meat remains questionable for many, UCD professor of food science Frank Monahan is a believer.

“We have seen unimaginable developments in the area of biotechnology, so I do think it will be on the market at some point in the future.”

But, he said, there are a range of production challenges to overcome. Scaling up to commercial level is one. Finding cost-effective energy and growth medium supplies are two more. And then there will be the myriad of regulatory demands to contend with.

When it does eventually hit the shelves, though, he’s also reasonably sure it will taste like the real thing. “If it’s nature-identical, it should taste like meat. That means the cells have to be aligned in a fibrous tissue structure and that fat has to be distributed throughout, what we call intra-muscular fat. There’s a bit more flexibility with a hamburger [in terms of reproducing it as a cell-based product] but you still need it to have the texture of ground-up muscle fibre,” he adds.

We have lots of plant-based clients, some of the biggest, but no cell-based meat or fish clients yet

With plant-based burgers from Moving Mountains and Beyond Meat now available in Ireland, consumers have already begun sizing up the possibilities and limitations of pea, wheat and soy protein as meat substitutes. Along with mushrooms, mung beans, beetroot, oats, barley and coconut oil.

But taste is not always the sum of its parts. Like many traditional food producers, some plant- and cell-based companies are considering, or already working with, specialised flavour providers.

‘’We have lots of plant-based clients, some of the biggest, but no cell-based meat or fish clients yet,’’ says International Flavors & Fragrances’ (IFF) global innovation programme director, Adam Janczuk.

IFF is one of the world’s leading flavour providers. Its 2018 annual report said its flavour compounds are used by producers of consumer foods including dairy products, soups, sauces, condiments, prepared meals, meat, fish and poultry.

“The cell-based guys are still in start-up mode, so they have a whole lot of priorities ahead of taste,” says Janczuk. But, as they find their feet, Janczuk is confident IFF’s cell-based client base will expand, just as it did with plant-based producers.

No surprise then to find him at a cell-based meat conference in Boston last June organised by New Harvest, a non-profit cellular agriculture research body. He was carrying samples of vegan crisps in two flavours: lobster roll and smoked bonito, a tuna-like fish.

The fishy flavours, he notes, are down to IFF’s expectation that cell-based fish products will beat cell-based meat to the market.

Describing different processes, Janczuk says plant-based work often involves adding grilled meat tastes and masking vegetal ones. A cell-based approach, by contrast, will likely focus on adding flavour and nutritional compounds to the broth or growth medium in which cells are replicated. Not a million miles from the idea that the taste of animal, poultry and fish meat can be influenced by feeding habits.

Adding flavour to growth media is an option, agrees Brian Wilson, chemist, epigeneticist and director of Ireland’s first cellular meat start-up, Macánta Meats. But there could be others. “We expect there will be a mix between additions at the media stage and more, if needed, in the final stages,” he says.

Our first shrimp dumpling prototype was 20 per cent cell-based shrimp. The rest was made from plant-based Quorn

Ahead of any additions, however, Wilson points out that the main reason his cell-based pork dumplings taste like pork is because they are pork. “Pork meat is composed of approximately 90 per cent muscle cells. Whether these cells come from a slaughtered animal, or are grown outside the animal, does not impact the taste.’’

Not that he would he have any problem using flavour providers. ‘’We see the value of using companies like IFF or Kerry to enhance both flavour and nutritional value,’’ he says, although the additions would have fit his company’s slaughter-free, eco-friendly profile.

Meanwhile, Singaporean start-up Shiok Meats, due to have a cell-based shrimp dumpling in restaurants by next year, has taken a partnership approach to taste.

“Our first shrimp dumpling prototype was 20 per cent cell-based shrimp. The rest was made from plant-based Quorn minced meat,” says Shiok’s co-founder and chief scientific officer, Ka Yi Ling. That shrimp-to-meat ratio, she said, is the same as a traditional dumpling.

Launched in the UK in 1985 and now owned by Philippine company Monde Nissin, Quorn uses a fermented fungus-based protein to replace meat’s flavour and texture in its plant-based products.

Hot on Shiok’s heels is BlueNalu, a Californian cell-based fish producer. “We should have our prototype yellowtail fish medallions ready by the end of the year and we expect to have a test product on the market in 24 to 30 months,” says its chief executive, Lou Cooperhouse, a microbiologist and food scientist.

Cooperhouse is taking a multipronged approach to taste and texture, working with both in-house experts and with external flavour and fish-food providers.

“The way we look at taste is to focus on what’s missing. So we might send a sample to our chefs and to a flavour company,” he explains, to find out what’s not there.

Blue Nalu’s work with a European fish-food company, meanwhile, is mainly about identifying the ingredients that would most improve the taste and texture of cell-based fish. “There are about 50 ingredients in normal fish-food. We don’t need all of those.”

But even as most cellular, and many plant-based, producers focus on dumplings, medallions, sausages, burgers and minced meat (known as unstructured products), an Israeli company is going direct to the next level: a cell-based steak.

Aleph Farms, run by food engineer and biologist Didier Toubia, says it could have a slaughter-free steak ready for commercial sale in three to four years. To get there Toubia is working on co-culturing four different cell types: fibre; connective tissue (collagen); fat (adipose tissue) and blood vessels – although without the actual blood.

His biggest taste challenge is partly texture and partly the umami flavours. To complicate matters, he wants both to be an integral part of his cellular farming system.

“Our process is about producing a steak that tastes like steak – we don’t want to be adding things. The taste and the texture has to be part of the tissue-generation process. We are about 80 per cent or 90 per cent there, but there is still development to do.”

Fat is many things, but its importance in taste can be underestimated. “Our attraction to it stems from its nutritional importance and value as a primary energy source,” says biotechnologist Andrés Montefeltro of Cubiq Foods.

Cubiq began work on the initiative just seven months ago having concluded plant- and cell-based foods are the future, creating a demand for better animal-free fats and fish-free oils such as Omega-3. On the supply side, they also saw a range of problems including disappearing fish stocks and environmental issues around commonly used vegan fat replacements such as palm and coconut oil.

Montefeltro expects to begin selling Cubiq’s “smart fat”, which uses vegetable oils and additives to replicate the function and taste of animal fat, early next year. The result will be juicier, tastier, more attractive plant- and cell-based foods, he predicts. Or, as Thier would have it, a version 2.0.

Cubiq’s next step will be to release a cell-based Omega-3 oil. There is one other, more personal, factor driving Montefeltro: deforestation to make way for animal feed crops.

“I am Argentinian, I used to eat meat twice a day. Now, in Europe I eat it maybe twice a week. You don’t need meat. I have seen what soy does to the forests and landscapes. And then it’s used to feed pigs in China. It doesn’t make sense.”