Mistruth in science: why is it so prevalent? 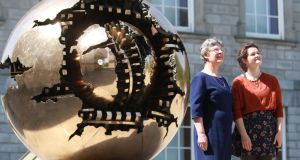 A paper examining why mistruth around science is so rampant at a time of extraordinary scientific achievement has won the 2018 Mary Mulvihill Award. The winning entry was submitted by Katie Carbonara, a post-graduate student studying environmental science at Trinity College Dublin.

The science media competition for third-level students commemorates the legacy of science journalist and former Irish Times contributor Mary Mulvihill who died in 2015.

The 2018 awards, which include a cash prize of €2,000 for the winner, was presented in Dublin on Wednesday by Dame Jocelyn Bell Burnell, one of Ireland’s most respected scientists.

This year’s competition invited entries on the theme “Science: Whose facts? Whose truth?” Ms Carbonara considered why “blatant scientific illiteracy” is so prevalent in an age of so many notable scientific discoveries. The reductionist nature of scientific inquiry may have contributed to this paradox, she suggests.

“By divorcing fact from value, science has allowed itself to become beholden to the whims of political will, funding, publications, and number of citations: a contest for the most charismatic ideas and results,” writes Ms Carbonara, who is native of New Hampshire in the US – her interests are in sustainable agriculture, indigenous knowledge and conservation biology.

“At the same time, a dichotomy exists between the idolisation of science as a panacea for all the world’s ills and the deliberate attack on truths that are widely acknowledged within the scientific community,” she adds.

Some of the ills that science is expected to solve are the product of science itself, she writes, “while some of the most contested issues are in urgent need of more science, to develop long-term solutions.”

If science is to play a role in averting humanity from its present path toward environmental destruction, it must “return to its roots of open-minded questioning, of recognising the interconnections between all things”.

The entry was praised by Prof Bell Burnell for being “passionate and punchy on a very important topic”. It was also good, responsible science journalism which was vital in a post-truth world, added the renowned astrophysicist who discovered the first radio pulsars as a postgraduate student during the 1960s.

She said she knew Mary Mulvihill very well, and marvelled at how she could link apparently disparate elements in her writing. She often cast a new light on “something over familiar or something overlooked” which was wonderful, she added.

Abeba Birhane and Siobhán Grayson, PhD students in cognitive science and computer science at University College Dublin, received a runners-up award for their joint entry, which analyses the assumptions that allow algorithms to pervade our social sphere unchecked.

“Data science, like other sciences, is a human endeavour and prone to human biases,” they argue. “Truth in data science is far from fixed, objective and independent of the values and interests of the data scientist herself.”

This is the second year of the award. “It’s a poignant time for her family and close friends; but it’s also a proud moment, as the award allows us to continue, in a small way, Mary’s role as an educator, mentor and advocate of science,” said Anne Mulvihill, her sister and member of the judging panel.

“Katie Carbonara, has written a very accessible piece on a complex topic, questioning the discipline of science and the work that it does; Mary would have approved,” she added.