How nonhuman life forms can change the course of history

In the ‘Columbian exchange’, plants, livestock and diseases have as much impact as people 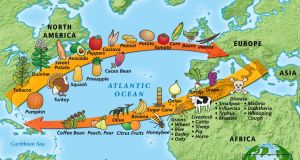 In Alfred Crosby’s ‘The Columbian Exchange: Biological and Cultural Consequences of 1492’, published in 1972, he argued for a different way of looking at the impact of the voyages of discovery on both the Americas and Europe

A few weeks ago, the historian Alfred Crosby died at the age of 87. He may not be well known to readers of science pages but he should be: he pioneered a way of using science to think differently about history. Historians usually consider “scientific history” to begin with the German empiricist Leopold von Ranke in the 19th century. Von Ranke advocated close interrogation of sources in order to develop a neutral history that was as close to the facts as possible. Crosby, however, suggested the use of scientific ideas to change the way historians look at the past. He advocated a view of the past that considered humans as part of an ecological system in which they were not the only actors who could change history.

Crosby’s pioneering work was The Columbian Exchange: Biological and Cultural Consequences of 1492, published in 1972. In the book, Crosby argued for a different way of looking at the impact of the voyages of discovery on both the Americas and Europe. He suggested the migration of European diseases, livestock and crops was just as important as the migration of European people. Further, he considered the long-term impact of the flow of non-humans between the Old World and the New World.

Among his suggestions was that the importation of the potato into Europe and sweet potato and cassava into Africa fuelled population expansions in both places, while smallpox decimated Native American populations. A later book, Ecological Imperialism, considered how winds and weeds contributed to colonialism alongside germs and livestock. Crosby struggled to find a publisher for The Columbian Exchange because his ideas were new and unusual. Now historians and textbooks commonly use the phrase when they discuss European colonisation.

Crosby decentred history by thinking about humans as just one group of potential actors in an ecological system. Despite decades of growth in the discipline of environmental history, this view of the past is still more common among scientists than it is among historians. We do not often try to view history from the point of view of microbes or wheat or weeds.

As climate change makes us appear more vulnerable to processes we have had a hand in starting but seem unable to stop, perhaps this is a good time to start thinking about history differently. Such a history could take many forms, but invasive species are one place to start and Ireland has plenty of these.

The zebra mussel is a freshwater mollusc that is native to Russia and the Ukraine. Zebra mussels arrived in Ireland in the 1990s (perhaps much earlier) either with ballast water discharged into the River Shannon or perhaps with imported second-hand leisure craft that had not been cleaned. They reproduce rapidly and cause damage by clogging pipes, coating the surfaces of boats and gumming up engines.

They have spread into multiple waterways in Britain, Ireland, southern Europe and North America. The zebra mussel has hitchhiked on our global trade systems and used us to dramatically expand its population and geographical range. In Britain, they were introduced in the early 19th century and spread through the canals developed to facilitate internal trade. Ireland’s canals, now used for leisure boats, continue to spread the mussel on this island.

The innocuous little organisms, growing to only about 2cm or 3cm, have proceeded to wreak various kinds of havoc in their new environment. Their very efficient filtering systems have changed the lakes and rivers where they spread, killing off native mussels and possibly affecting eels in Lough Erne. They clogged pipes leading to a salmon fishery resulting in a loss of fish. They have coated piers and anchors and buoys and even parts of the Ardnacrusha power plant.

They have also brought into being a variety of human responses to try to get them under control. There has been significant investment in scientific research, the development of a Zebra Mussel Control Group, and a campaign of flyers and signs to caution boat owners and others to prevent further spread. Chemicals have been developed and deployed to kill the mussels. If we view the history of inland waterways from the point of view of the zebra mussel, we get a picture of how a non-human organism can change the course of history that Crosby would have approved of.