Chemicals, silt and climate change threaten fish species and a way of life 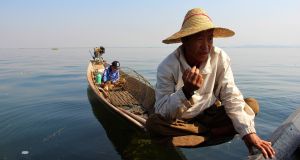 Since 6am Myint Soe and his son have been fishing aboard their long-tail boat. It looks as though it’s been a good morning – between their feet lie about 30 fish of a kilo or less in weight, valued, he says, at about 30,000 kyat or €18. Soe is using net traps to catch Inle and common carp and says he will stay out on the lake until one o’clock in the afternoon.

At 22km long from north to south, Inle lake is the main life source for communities in this part of Myanmar’s rural Shan plateau region. For residents of the 200 villages in the lake’s watershed, the majority of whom belong to the Intha ethnic group, it provides fish to eat and sell. Its renowned hydroponic floating gardens – tomatoes, squash and aubergine plants growing on beds of soil interwoven with water hyacinth tubers – known locally as ye-chan, run across thousands of acres of the lake’s fringes.

At an altitude of 900m and surrounded by the famed Shan hills, Inle Lake’s ecosystem is isolated from neighbouring aquatic areas, a factor that contributes to its individual importance (remarkably, almost nothing is known about the lake’s indigenous species). It appears a serene setting for fishermen such as Soe to quietly go about their work.

But today, the lake is threatened like never before. A growing population, upwards of 200,000 people, and the use of chemicals and fertilisers in the floating gardens, as well as silt accumulations and climate change events have put huge pressure on its ecosystem.

Myint Soe says some concerns have temporarily eased: “People used to use battery and shock methods (to catch fish) but have stopped; the water level is a bit better, higher than before.” Serious problems are, however, emerging. “The floating garden agriculture used to be better before. The weather used to be more suitable,” he says, “Before, winter used to be longer. But now (in February) we are already in summer.”

As a destination to escape the oppressive heat and crowds of cities such as Yangon and Mandalay, Inle Lake has attracted tourists since the 1970s, and pilgrims to its monasteries for centuries. But it wasn’t until Myanmar’s military government embarked on democratic political reforms over the past decade that real change engulfed the lake and its hinterland.

“In 2012, the town was asleep,” says Mike Haynes, a heritage management and tourism consultant based in Nyaungshwe, a dusty town connected to Inle Lake by a traffic-busy canal. “Then, there were 17 hotels and overnighting facilities in Nyaungshwe; now, there’s around 100.” International chains such as Novotel and Best Western have descended on the lake region, with a five-star Sofitel resort opening on the eastern lakeshore this month. The violence unleashed by government forces on Rohingya Muslims 475km to the west in Rakhine state is believed to have led to a 20 per cent fall in foreigners visiting Inle Lake last year, though local tourist numbers rose.

The past two decades have seen Myanmar slammed by climate-related events on an almost unparalleled scale. A cyclone in 2008 that swept in from the Bay of Bengal in the south killed at least 138,000 people and caused €8 billion worth of damage. From the north, major waterways such as the Irrawaddy and Salween rivers are struggling with millions of tonnes of silt build-up caused, in part, by increasing glacier melt in the Tibetan Plateau. Germanwatch, a Bonn-based NGO, ranked Myanmar among the three countries worst-affected by weather events (along with Haiti and Honduras) between 1997 and 2016.

During the dry season, which runs from November to May, Inle Lake is, at just 10 feet deep, already shallow, making it extremely susceptible to high temperatures. Record temperatures caused parts of the lake to disappear in 2010. An 18-month drought in 2016, exacerbated by the El Niño climate event, caused several canals to dry up, leaving villages reachable only by boat stranded.

Research conducted by the United Nations Development Programme (UNDP) has found that: “The resulting fall in water levels and several years of poor rainfall, believed to stem from climate change, has shrunk the originally 100sq mile lake by a third. Fears have been voiced that one day it may simply vanish.” This, experts suggest, may be a reality by the end of the century. Such is the perceived threat to the lake’s future that both the EU and UNDP are involved in separate multiyear, multidisciplined projects to assess the effects climate change is having on the lake.

Local activities are having a damaging effect, too. Deforestation and vegetation burning in the hills surrounding Inle Lake has left soil exposed to wind and rain that sees it draining into the lake.

“A fivefold increase of floating gardens over the last 30 years (to 7,200 acres) and subsequent overuse of chemical fertiliser and pesticides has had a deteriorating impact on water quality and fish stocks,” says Joern Kristensen, founder of the Myanmar Institute for Integrated Development, a non-profit body. He says the harvesting of aquatic plants used as mulch on floating gardens has changed the lake’s ecosystem.

New efforts and research meant to protect the lake include its addition to the list of Unesco’s international biosphere reserves, the first in Myanmar, in 2015. A conservation trust fund was established in 2013 while a tourism management plan developed by Kristensen’s Myanmar Institute for Integrated Development and the government is hoped to guide sustainable development in the region.

The government has committed €34 million to the conservation and development of the lake, while research and training efforts part-funded by the European Union, the government of Norway and others have been launched. Recent months have seen politicians working to draw up a new conservation law for the lake. On the ground, local experts say a €7.50 fee charged to foreigners upon entering the lake area is put towards embanking and dredging silt from surrounding canals.

And yet for some indigenous species it may already be too late. At least four fish species endemic to Inle Lake are now classified as endangered. The Inle carp, a popular food fish so intertwined with the local culture that its binomial nomenclature shares the name of the Intha people, is threatened by cross-breeding with non-native common carp. The Inle catfish and Inle prawn have not been seen for years. The last scientific verification of the Puntius compressiformes, a type of barb, was in 1994.

These species may well be lost for ever. For fishermen such as Myint Soe who use decades- and centuries-old methods to catch fish, change is coming fast. So too for the families who rely on the lake to ferry their children to school or transport household appliances such as fridges and washing machines. The extent to which the government, experts and locals collaborate in the coming years will decide whether Inle Lake survives.