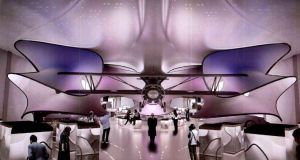 Winton Gallery exhibition’s first World War biplane, surrounded by a stretched canopy of synthetic fabric, curved in the form of the gyrating airflow.

The new Winton Gallery at London’s Science Museum in South Kensington holds a permanent display on the history of mathematics over the past 400 years. The exhibition shows how mathematics has underpinned astronomy, navigation and surveying in the past, and how it continues to pervade the modern world. People use maths in a bewildering range of areas: in commerce, finance and government, at work, in universities and at home. Sailors and pilots, gamblers and gardeners, bankers and traders, meteorologists and medics all make daily use of mathematics.

It is beneficial to society that everyone should have at least a general appreciation of mathematics, but the subject can be forbidding and remote, so initiatives like the new gallery are to be warmly welcomed. The gallery tells the story of how mathematics has shaped our world and our lives over the past few centuries. It shows how maths has helped us to understand and to control the world. The interface between art and science is blurred. One could say that there is a “fuzzy boundary” between mathematics and art, and aesthetics plays an essential role in each. Given that, I was disappointed that many of the displays, although quite interesting, were not visually more appealing. As a result, scholars may linger, while more casual visitors may pass on quickly.

The centrepiece of the exhibition is a first World War biplane surrounded by an enormous stretched canopy of synthetic fabric, curved in the form of the gyrating airflow around the plane. While impressive, this could hardly be described as “cool”; the primary emphasis of most of the exhibits is on history. For example, there are many old instruments, mathematical models and calculating machines. The exhibition is likely to appeal more to older teenagers and adults than to younger children.

Perspective is of profound importance in the development of art and design. It enables artists to create images of objects in space that are perceived as realistic. One display shows the use of perspective in the design of ornamental gardens. Another has some pencil drawings by JMW Turner, professor of perspective at the Royal Academy. Turner prepared these drawings to teach his students the mathematical principles of perspective, enabling them to create convincing landscape images. He wrote that “without the aid of perspective, art totters on its very foundations”.

The key themes of the exhibition include travel and trade, models and maps, beauty and form, war and peace, and even life and death. Displays show how mathematical principles underlie all of these areas. For example, the design of efficient hull-shapes for ships requires advanced mathematical modelling. In navigation, the problem of finding the longitude was eventually solved by constructing accurate clocks. One of John Harrison’s remarkable time-pieces is on display in an adjoining gallery.

The moral role of mathematics was recognised by John Flamsteed, the first Astronomer Royal. Flamsteed wrote to Samuel Pepys that mathematical learning “opens and enlarges the mind . . . keeping men from running into vice for want of employment . . . and preserving them from brutishness (a common fault of sailors)”. You could do worse than to improve your mind and avoid brutishness, by visiting the Winton Gallery next time you are in London – entry is free but they welcome donations.