Scientists take to the pub to spread love of knowledge

Pint of Science festival will host talks in Dublin, Cork, Limerick and Galway 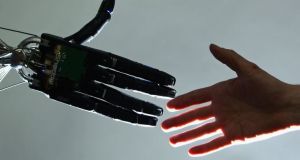 Biotechnology and robotics are among the subjects being discussed at the Pint of Science festival. Photograph: Jeff J Mitchell/Getty Images

How do voters make decisions in referendums? What are quantum computers? Can we tackle environmentally unfriendly cow burps by changing the animals’ diets? What medicines will we be using in the future?

Those are just some of the subjects that will be up for discussion over the coming evenings during Pint of Science Ireland, where researchers speak in local pubs about their work in an accessible way.

Pint of Science, which started in the UK in 2013, will take place this week in four cities in Ireland – Dublin, Cork, Limerick and Galway – and will span the themes of Beautiful Mind (neuroscience, psychology and psychiatry); Atoms to Galaxies (physics, chemistry, maths, astronomy); Our Body (medicine, human biology, health); Planet Earth (geosciences, plant sciences, zoology); Tech Me Out (biotechnology, robotics, computers) and Our Society (law, history, politics, policy, languages).

It is an opportunity for people to learn about what researchers are doing in their locality, according to Karen Slattery, who is directing the event in Ireland with fellow Trinity College Dublin PhD candidate Rebecca Amet.

“We say it is for the public, in normal language you can understand,” says Slattery, who is in the second year of a PhD in immunology. “A lot of research is funded by taxpayers’ money and it is important they know what is going on.”

While Dublin events have been booked out, there are some tickets available for talks in Cork, Limerick and Galway.

Beatriz Gil Pulido, who is one of the coordinators for the Cork events, is particularly looking forward to hearing about research on waste water and how to tackle antibiotic resistance.

“My background is in environmental science and I work in microbiology, and these are really hot topics,” says Gil Pulido, who is originally from Spain and who is currently doing a PhD at UCC on the microbiology of dairy waste.

She believes researchers need to share more about what they do, and Pint of Science gives them an opportunity to do that in a relaxed environment.

“There is a really big gap in between science and the general public, and the public don’t really know what scientists are doing in the lab, they don’t have information,” she says. “There are so many cool things going on in science and as researchers we can share that.”

Pint of Science Ireland runs until May 16th. For more information and to book tickets see https://pintofscience.ie