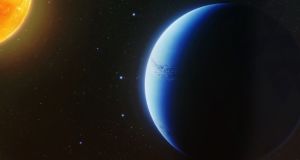 Scientists, including a Dublin astronomer, have detected an exoplanet with an atmosphere that is free of clouds, marking a pivotal breakthrough in the quest for greater understanding of planets beyond our solar system.

An exoplanet is a planet located outside our solar system, usually orbiting another star many millions of kilometres away from Earth. They are sometimes called extrasolar planets and are normally enveloped in dense clouds that make studying their make-up challenging.

Dr Ernst De Mooij from Dublin City University’s School of Physical Sciences joined an international team of astronomers led by Dr Nikolay Nikolov from the University of Exeter in the UK, to find the cloud-free atmosphere of the exoplanet WASP-96b.

Using Europe’s “Very Large Telescope” in Chile, the team studied the atmosphere when the planet passed in front of its host star. This enabled them to measure the decrease of starlight caused by the planet and its atmosphere, thereby determining the planet’s atmospheric composition.

Just as an individual’s fingerprints are unique, atoms and molecules have a unique spectral characteristic based on light absorption that can be used to detect their presence in celestial objects.

The spectrum of WASP-96b shows “the complete fingerprint of sodium”, which can be observed only in an atmosphere free of clouds. The exoplanet is “a typical hot gas giant” – with surface temperatures of 1,000 degrees – similar to Saturn in mass and exceeding the size of Jupiter by 20 per cent.

The results are published in the latest issue of the scientific journal Nature.

The key observation allowed the team to measure how abundant sodium is in the atmosphere of the “hot Saturn” planet. Sodium, which gives street lights their orange colour, is the sixth most common element.

The team confirmed levels similar to those found in our own solar system. The next step is to use other telescopes to confirm the presence of other gases, notably water.

This research is likely to lead to confirmation of the exoplanet’s composition, how it formed and how it evolved over time; knowledge that may reveal more on how our solar system developed, Dr Mooij explained.

“WASP-96b will also provide us with a unique opportunity to determine the abundances of other molecules, such as water, carbon monoxide and carbon dioxide with future observations,” he added.

Dr Nikolov said they had been studying the spectral profile of 20 exoplanets. WASP-96b was the only exoplanet that appeared to be entirely cloud-free and showed such a clear sodium signature, “making the planet a benchmark for characterisation”.