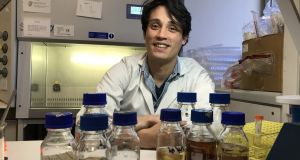 Javier Varela from Chile at work in the laboratory

You are interested in yeast, what are you looking to do with it?

Yeasts are fascinating organisms. Besides using them for baking or making wine or beer, we can use them to produce chemicals in a more sustainable way. In our group we are particularly interested in manipulating the yeast genome to produce flavour and aroma compounds.

What is the benefit of using yeast to make flavours and aromas?

There are several advantages. Yeasts are easy to grow, even if the conditions where they are cultured are not optimal. Also, they are easy to genetically manipulate and they produce an array of flavour compounds naturally. Researchers have been producing flavour and aroma compounds in yeasts for a while but they have mainly been using Saccharomyces cerevisiae, the same yeast used in baking and winemaking.

In our group we are interested in using another yeast species, Kluyveromyces marxianus. It grows faster than S. cerevisiae and can also grow at higher temperatures. These characteristics are important in an industrial setup. Faster growth means more rapid production of products and growth at higher temperatures decrease the risk of contamination with other microorganisms.

You use a technology called Crispr-Cas9, can you explain what that does?

Crispr-Cas9 technology is a revolutionary tool that enables us to change the DNA sequence of the yeast genome easily. We introduce a cut in the DNA in a specific site in the genome that we want to modify and the yeast will attempt to repair this cut. The repair system occasionally makes mistakes, which results in mutations or changes in the DNA at a specific site. So we basically have a system that we can program to make mutations anywhere in the yeast genome, and we can also introduce other genes in the cutting site. In the context of flavour compounds, this means that we can easily introduce a whole pathway for the production of a certain molecule that is not produced naturally by the yeast.

How is the project progressing?

I think we are making good progress. We are part of a team called Chassy, a 10-partner project funded by the EU’s Horizon 2020 Programme, and that collaboration allows us to make progress quicker.

You are originally from Chile, how did you come to Ireland?

I came to Ireland in 2014 to do my PhD as part of the Yeastcell Marie-Curie programme, funded by the EU’s Seventh Framework Programme for Research. I have submitted my PhD thesis now and I am waiting for my viva [exam]. Before coming to Ireland, I didn’t know much about the country but I have been able to travel around and discovered how nice it is.

Is there anything in particular you notice about Ireland as a place to live or do research?

I think that there is more collaboration happening between European countries compared to South America, and that’s an important factor determining how fast and well we can do research. As a place to live I think Ireland is great, people are always friendly and welcoming. The only hard part is the weather, but that’s old news. I took me a while to get used to having four seasons in a day but now I’m okay with it.

What do you like to do to take a break from the research?

I have been playing guitar for more than 15 years and I like making and recording my own music. I also like making my own beer at home, I mostly like brewing red ales and IPAs. I like travelling too, road trips are really my thing, they remind me of home.