Marine reserves work as they protect the oldest and largest animals

After centuries of fishing we do not know what natural conditions are. Only marine reserves will give us such insights 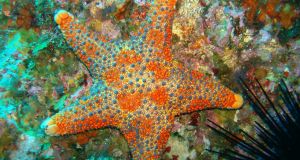 The move by Minister for the Marine Michael Creed to exclude large fishing trawlers from Ireland’s coastal seas is great news for the conservation of marine life, coastal communities, and is an important step towards a flourishing and sustainable supply of seafood.

Other island nations, notably in the Pacific Ocean, but also Indonesia and Chile, are undertaking similar measures. This is because the collateral damage of heavy-duty fishing destroys seabed habitats, indiscriminately killing species not targeted by fishing, including other fish but also birds, seals and dolphins. Using less damaging and more selective methods is both ethical and more environmentally sustainable.

In addition to protecting fish habitats, using methods that refrain from ploughing up the seabed will help the retention of “blue (ocean) carbon” which a flourishing marine life captures and traps in its shells, skeletons and sediments in the seabed. The ocean, having absorbed most of the heat from climate warming, acts as a sink for the greenhouse gas carbon-dioxide, and thus helps to mitigate the effects of climate change.

Not only can marine ecosystems keep carbon-dioxide in their sediments, but unlike their counterparts on land they can recover and restore themselves at no cost to us; they only need time. Given this, sea life will return.

This has, at a minimum, a two-fold benefit to sometimes marginalised coastal communities. It provides food security, but also sustainable ecological tourism.

One of the foremost strategies for the recovery of marine ecosystems that has proven successful in other countries is the establishment of marine reserves. By protecting all marine life within a marine reserve, fish and lobsters grow older and larger, producing proportionally more eggs and young than smaller animals.

The term used for these large predators in some scientific papers is BOFFFF –“big old fat fecund female fish”. We need more BOFFFF! Why? Because the recovery of BOFFFF in designated reserves both conserves genetic diversity (constant fishing selects for smaller females that breed early) and produces more young fish that enrich adjacent fisheries.

Marine reserves work ecologically because they protect the oldest and largest animals, which would have been the first removed by fishing. Unlike on land, where hunting removes herbivores such as deer, in the ocean we fish the large top predators. Their removal results in cascading changes throughout the food web.

Direct proof of this is evident in the Goat Island marine reserve, the first marine reserve established in New Zealand in 1975. It was assumed at the time to be in pristine condition, but following protection we discovered that the areas grazed bare of seaweed by sea urchins were not natural but due to the absence of large snapper (fish) and spiny lobsters (crayfish) that eat the urchins.

This phenomenon has now been seen from the Mediterranean to Americas and Australia. This return of large predators to dominate the food web, resulting in fewer sea urchins and thus more abundant seaweed habitat for other species, is shown on the new Netflix series with David Attenborough Our Planet.

Marine reserves work socially. They succeed where other measures fail because they are simple to understand and police. The experience in New Zealand is that local fishermen and the public take pride in their reserves, promptly reporting people they observe stealing fish or crayfish.

Within marine reserves people can enjoy watching underwater life in abundance, benefiting public education and tourism. In New Zealand, the amazing Experiencing Marine Reserves programme has taken over 30,000 children, and many of their parents, snorkelling inside and outside of the country’s marine reserves. They witness the far greater abundance of fish inside reserves. Seeing is believing.

Marine reserves are educational. They inform us of the effects of fishing (if any), and thus how sustainable fishing may be. If we want to understand and adapt to the effects of climate change such comparisons will be invaluable.

Marine reserves provide us with an essential baseline. Until recently we have been experimenting with the oceans without any untouched natural “controls” or reference areas. The European Marine Strategy Framework Directive is thus trying to establish “good environmental” status without knowing what it would look like.

The ocean may be wild but it is not pristine. After centuries of fishing we do not know what the natural conditions are. Only marine reserves will give us such insights, but to date there are none in Ireland that prohibit all fishing.

Within five to 10 years of reserve establishment we would begin to see what natural conditions should be. If you want to see this for yourself I highly recommend a fieldtrip to New Zealand where there are now 44 marine reserves, with more planned.

Anybody who has listened to news about the state of ocean life around the world – from over-fishing, to accidental killing of whales, seabirds and other marine life; to coral reef bleaching; and plastic and other pollution – knows that the oceans urgently need protection. The good news is that by stopping these destructive activities, ocean life can recover without further intervention or cost. We can make a start at home.

The recent announcement to protect Ireland’s seas within six nautical miles of the coast should be followed by establishing marine reserves both within and outside it.

Simple no-fishing areas can be policed using surveillance and satellite technologies. These may reduce rather than increase enforcement costs because the same areas should already have possibly high-enforcement costs due to more complex regulations. The long-term result would be more fish for Ireland’s commercial and recreational fisheries. It’s common sense.

Let’s not perpetuate the ambiguity of countries declaring so-called “protected areas” which do not even aim to fully-protect marine life (such as the recent announcement by the UK). It is false for countries to suggest these areas contribute to the Convention on Biological Diversity target for having 10 per cent of the ocean fully protected.

Ireland could follow the lead of island states in the Pacific, including New Caledonia, Cook Islands, Pitcairn, and Palau, and declare the entire exclusive economic zone (EEZ) a “marine protected area”. Within this selected artisanal, industrial and sport fisheries, aquaculture, marinas and other activities are licensed. This overturns the present situation from one where anything goes until regulated to one where only sustainable uses are allowed.

No new policies, laws or science are required to make this happen. The Irish Government is already signed up to the Convention on Biological Diversity target of 10 per cent of its seas in marine reserves by 2020, and the likely new target will be 30 per cent by 2030.

Priority areas for conservation were identified over 20 years ago upon the completion of the BioMar-LIFE project, which surveyed Ireland’s littoral and sublittoral coast. Prior to this, under the Wildlife Act in 1981, Ireland established its first marine reserve, Lough Hyne in west Cork (yet allowed fishing there).

Irish farmers know it makes sense to take care of their broodstock, its gene pool and pasture. We need to manage Irish fisheries with the same wisdom. We must protect broodstock, and not plough up the seabed habitats that they depend on.

The ocean is a public resource and requires a public response. We need to thank those who demonstrate political courage and initiative. Only with forward thinking leadership will Ireland’s marine life and resources not only thrive but be enriched for both present and future generations.

Mark J Costello led the five-year BioMar survey of Ireland’s inshore environment and is a lead author on the next (sixth) report of the International Panel on Climate Change. Originally from Naas, Co Kildare, he specialises in research and teaching on marine biodiversity and marine reserves, and has worked in New Zealand since 2004 – https://www.facebook.com/marinereserves/